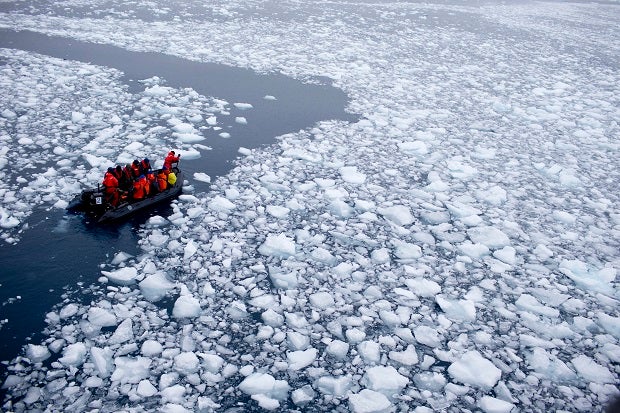 In this Jan. 22, 2015 photo, a zodiac carrying a team of international scientists heads to Chile’s station Bernardo O’Higgins, Antarctica. Water is eating away at the Antarctic ice, melting it where it hits the oceans. As the ice sheets slowly thaw, water pours into the sea, 130 billion tons of ice (118 billion metric tons) per year for the past decade, according to NASA satellite calculations. AP File Photo

The study follows research out last year, led by NASA glaciologist Eric Rignot, warning that ice in the Antarctic had gone into a state of irreversible retreat, that the melting was considered “unstoppable” and could raise sea level by 1.2 meters (four feet).

This time, researchers at Germany’s Potsdam Institute for Climate Impact Research pointed to the long-term impacts of the crucial Amundsen Sea sector of West Antarctica, which they said “has most likely been destabilized.”

While previous studies “examined the short-term future evolution of this region, here we take the next step and simulate the long-term evolution of the whole West Antarctic Ice Sheet,” the authors said in the Proceedings of the National Academy of Sciences.

They used computer models to project the effects of 60 more years of melting at the current rate.

This “would drive the West Antarctic Ice sheet past a critical threshold beyond which a complete, long-term disintegration would occur.”

In other words, “the entire marine ice sheet will discharge into the ocean, causing a global sea-level rise of about three meters,” the authors wrote.

“If the destabilization has begun, a three-meter increase in sea level over the next several centuries to millennia may be unavoidable.”

Even just a few decades of ocean warming can unleash a melting spree that lasts for hundreds to thousands of years.

“Once the ice masses get perturbed, which is what is happening today, they respond in a non-linear way: there is a relatively sudden breakdown of stability after a long period during which little change can be found,” said lead author Johannes Feldmann.

The authors noted that Antarctica’s situation presents the largest uncertainty in sea level projections for the coming centuries, and that studying the vast region poses many challenges.

And indeed, just days before the PNAS study was released, another scientific paper used NASA satellite data form 2003 to 2008 to show that Antarctic ice had gained mass, and had packed on enough to exceed the amount lost in other areas.

“We’re essentially in agreement with other studies that show an increase in ice discharge in the Antarctic Peninsula and the Thwaites and Pine Island region of West Antarctica,” said a statement by Jay Zwally, a glaciologist with NASA Goddard Space Flight Center whose study was published October 30 in the Journal of Glaciology.

“Our main disagreement is for East Antarctica and the interior of West Antarctica—there, we see an ice gain that exceeds the losses in the other areas.”

According to climatologist Michael Mann, who was not involved in either study, the use of older satellite data could be the cause for the disconnect.

“It sounds to me as if the key issue here is that the claims are based on seven-year-old data, and so cannot address the finding that Antarctic ice loss has accelerated in more recent years,” he told AFP.

The Antarctic Ocean has increased its absorption of CO2