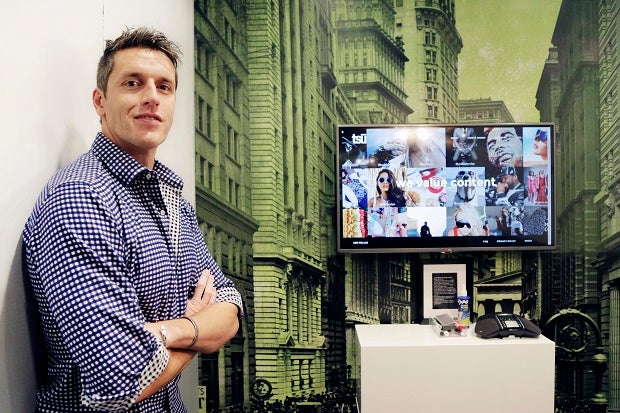 In this Wednesday, Nov. 4, 2015, photo, Sebastian Sobczak, CEO of Tsu.co, poses in his company’s New York office. Tsu.co is winning converts to its social network by paying them for their posts. Facebook currently blocks all links from the smaller network, claiming they’re low quality links that border on spam. AP

SAN FRANCISCO — Suppose every time you posted on Facebook, the social network tallied up the ad revenue it earned against your update and passed a percentage back to you. Of course, Facebook does nothing of the sort — but its much smaller rival Tsu.co does.

Though now Tsu (pronounced “Sue”) appears to be paying a different sort of price. In late September, Facebook started deleting millions of posts that included links to Tsu — more than 9.5 million of them, the smaller company claims. Facebook also blocks new posts that merely contain the text “tsu.co” but no links, warns users that links to Tsu are “unsafe” and fails to deliver Instagram posts and texts via Facebook Messenger that mention Tsu’s Internet address or link to the site.

Facebook defends its Tsu ban as a way to prevent its service from turning into a hangout for scam artists and opportunists hoping to make a quick buck. Tsu says Facebook just doesn’t want its users to realize that their photos, videos and personal observations might actually be worth something.

Facebook, which has an understandable interest in protecting its 1.5 billion users from an onslaught of digital rubbish, is one of the Internet’s largest gatekeepers. That gives it extraordinary sway in determining who can reach its vast membership — not to mention what those members can discuss using its apps and services.

That can be a big issue when the subject involves a challenge to a company’s core business — in this case, selling advertising against the material Facebook users contribute for free. Facebook has earned $2.1 billion on revenue of $12 billion during the first nine months of this year alone. The company now has a market value of about $300 billion, and no particular interest in generating traffic for a potential competitor.

There’s a long history of similar disputes among technology companies, who almost always claim to be acting in the interests of their users. Amazon, for instance, recently yanked Google and Apple streaming-TV devices from its virtual shelves, clearing the way for its own such gadgets. In just the past few days, several banks have blocked outside financial-planning apps from connecting to their systems, citing security concerns.

Tsu, which launched just over a year ago, has grown quickly; CEO Sebastian Sobczak says it has 4 million members. It has raised about $11 million in venture capital.

Facebook’s Tsu purge came without warning and affected a swath of users that included rap artist 50 Cent, who shared a link to a video on Tsu with more than 38 million Facebook fans. The team that handles 50 Cent’s social media accounts didn’t respond to requests for comment.

Sobczak denies that his service is paying people to post links on Facebook. Tsu users are paid based on how much advertising it sells alongside their posts. That revenue-sharing setup is similar to financial models used by major digital services such as Google’s YouTube; Facebook users widely share YouTube links with one another.

“It feels like we are being singled out and they are trying to stop a competitor with a more efficient business model,” Sobczak says. “What are they afraid of?” Sobczak, a former venture capitalist, says Facebook hasn’t responded to his inquiries.

Claudia Everest, a frustrated Facebook user who embraced Tsu to find buyers for her $30 drawings of dogs, says Facebook is trying to deflect attention from Tsu’s revenue-sharing concept.

“I don’t think they are afraid of Tsu as much as they are of anything that lets people know their content has value,” says Everest, who lives in Stoke on Trent in England. “That picture you posted of your dinner last night may not seem like it has value, but it does to the advertisers.”

Facebook does, however, frequently rejigger its algorithms in ways that sometimes limit how many people see any given post. Such changes have alienated some longtime users such as Kevin Hinkle of Lake Mary, Florida. Hinkle had built a Facebook following of nearly 5,000 people, but felt as if his posts weren’t reaching as many people over time.

For Hinkle, the reduced exposure meant fewer people to advise in his self-described role as a “joyologist.” He’s been pleased with the response on Tsu since he set up an account late last year. Hinkle says he has made about $4,100 on Tsu while averaging 10 to 20 posts per day.

“Now it looks like it could become a Facebook competitor,” Hinkle says. “I think Facebook sees where things could be heading and knows it wouldn’t be good for them at all.”