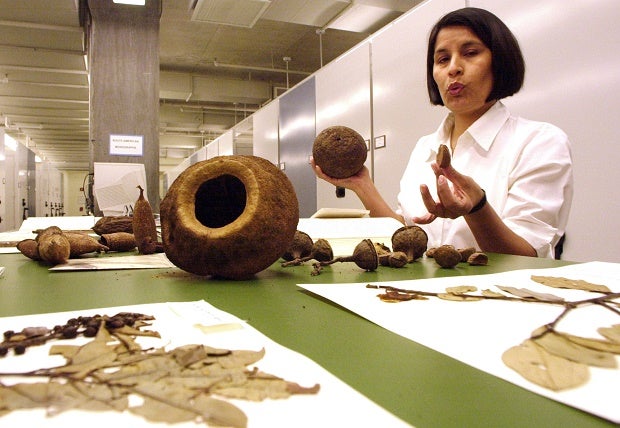 In this April 23, 2002 file photo, specimens from the Brazil nut, Lecythidacene family, are displayed inside the Herbarium at The New York Botanical Garden, in the Bronx borough of New York. A first-of-its-kind examination of thousands of types of trees in the Amazon found that as much as half of the species may be threatened with extinction or heading that way because of massive deforestation. It’s not just strange tropical trees, but the plants that provide people with tasty Brazil nuts and elegant mahogany are among the more than 5,500 tree species in deep trouble in the Amazon, according to a new study. AP FILE PHOTO

WASHINGTON — A first-of-its-kind examination of the Amazon’s trees found that as many as half the species may be threatened with extinction or heading that way because of massive deforestation. Among the more than 5,000 tree species in deep trouble: the ones that produce Brazil nuts and mahogany.

An international team of 158 scientists found that depending on the degree to which deforestation comes under control in the next 35 years, between 36 and 57 percent of the 16,000 tree species in the tropical rainforest area would be considered threatened. Their study is published in Friday’s edition of Science Advances.

The range rests on whether cutting down the region’s forest continues at the rate of the late 20th and early 21st centuries or slows down to lesser levels proposed in 2006, study authors said. If deforestation continues at the same pace, nearly 8,700 tree types are in trouble, but the number of species at risk could be as low as 5,500 if nations are able to cut back as planned, said study co-author Nigel Pitman from the Field Museum in Chicago.

“We’ve never had a good idea of how many species are threatened in the Amazon,” Pitman said Friday. “Now with this study, we have an estimate.”

Killeen said the tree that produces Brazil nuts is seriously under threat, while “mahogany is commercially extinct throughout the Amazon.” He said that means there’s no more industry harvesting the wood, but some trees exist.

Duke University ecologist Stuart Pimm, who was not part of the study, praised the work as sensible and important.