Male vs. female brain? Not a valid distinction, study says 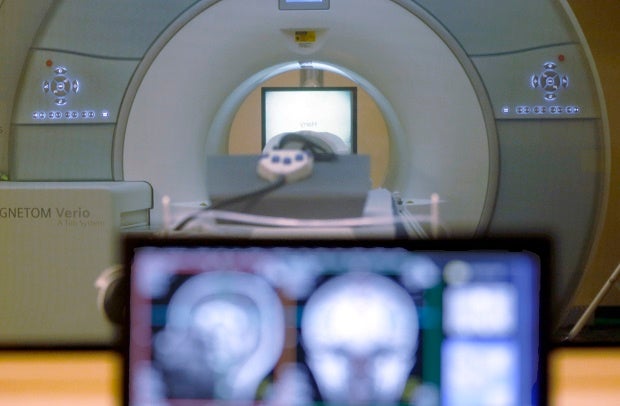 In this Nov. 26, 2014 file photo, the brain-scanning MRI machine that was used at Carnegie Mellon University in Pittsburgh, for an experiment on tracking brain data is seen on campus. Men and women can look pretty different, but a new study says their brains can’t be neatly divided into male and female. Specific parts of the brain show anatomical differences, but they only rarely line up to point to one sex or the other in a given person’s brain, the researchers said. AP File Photo

NEW YORK, United States—Are the brains of men and women truly different? Not if you look at the overall structure, a new study says.

While specific parts show sex differences, an individual brain only rarely has all “male” traits or all “female” traits, researchers report.

That argues against the idea that brains can be neatly divided into two sex-based categories, Daphna Joel of Tel-Aviv University and co-authors conclude.

They published their work in a paper released Monday by the Proceedings of the National Academy of Sciences.

They used MRI scans of more than 1,400 brains, focusing on anatomy rather than how brains work. They scored variable traits like tissue thickness or volume in different parts of the brain. They focused on traits that showed the biggest sex differences, dividing the scores into a predominantly male zone, a predominantly female zone, and an intermediate range.

The key question: How often did a brain end up in just one of those three? Such consistency turned out to be unusual, generally found in 6 percent or less of brains across analyses of several sets of data. It was much more common for an individual to score in both the male and female zones than to show a lineup that indicated only one sex or the other.

The researchers also used a similar approach to analyze psychological and behavioral scores from two prior studies that covered more than 5,000 participants, and again got similar results.

Overall, the results show “human brains do not belong to one of two distinct categories,” male and female, the researchers concluded.

Larry Cahill, a neuroscientist at the University of California, Irvine, who didn’t participate in the new study, said he agreed that brains contain varying mixtures of male and female anatomical traits. But that doesn’t rule out differences in how the brains of the two sexes work, he said.

There’s “a mountain of evidence proving the importance of sex influences at all levels of mammalian brain function,” he said.

That work shows how much sex must matter, “even when we are not clear exactly how,” he said in an email.

Learning many languages does your brain good

Keen to boost your brain? Play chess or read Plato