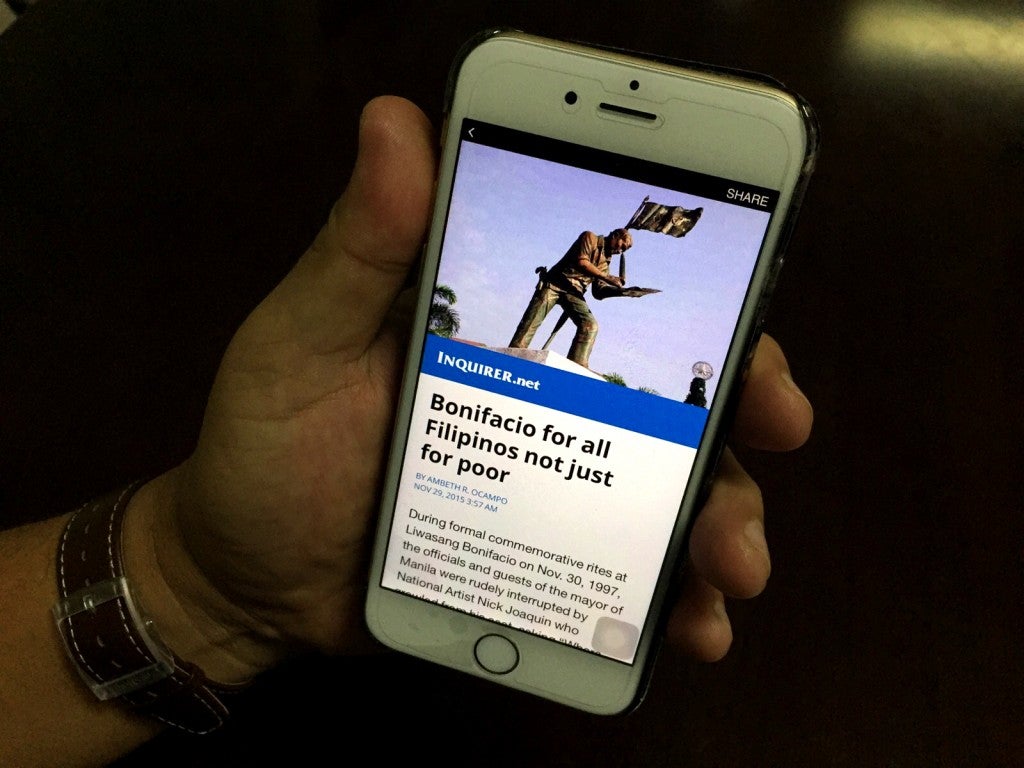 News on mobile can now be read as they are reported in real time, thanks to Instant Articles.

The new feature, available for all iPhone users with Android forthcoming, quickly displays news and information on mobile Facebook when shared by select partner publishers, among them INQUIRER.net.

“As more people get their news on mobile devices, we want to make the experience faster and richer on Facebook,” said Andy Mitchell, director of Facebook’s Global Media Partnerships at the Thursday launch of Instant Articles in the Philippines.

The average news story takes about eight seconds to load, and even longer in the Philippines which has one of the slowest Internet connections in Asia, Mitchell said, adding that Instant Articles makes the reading experience “as much as 10 times faster than standard mobile web articles.”

John Nery, INQUIRER.net editor in chief, described the partnership as a welcome development as more and more people shift to mobile for digital news.

“We are delighted to be working closely with Facebook. Already, more than half of our readers read Inquirer.net on mobile,” Nery said. “Instant Articles will allow us to meet the exacting needs of an ever-growing audience,” he added.

There are at least 109 million mobile user accounts in the Philippines, which has a population of 100 million, according to Anjo Mendoza, president of Megamobile. The company, an Inquirer subsidiary, produces apps for mobile devices. Megamobile’s figures indicate that most mobile users have more than one account.

People accessing Facebook through applications tailored for iPhones will start seeing lightning bolt icons on the upper right corner of some stories shared in the news feeds.

Along with the faster experience of getting the news, Instant Articles introduces a suite of interactive features that allow publishers to bring their stories to life in new ways.

These features allow users to:

Mitchell said that expanding Instant Articles in the Philippines was “a significant milestone for the product and (its) early launch partners.”

“Instant Articles has been designed with extensive feedback from publishers, and we’re excited to bring this collaboration to our publishing partners in Asia to help them distribute fast, interactive articles to their readers in the Facebook app,” he added

Ken Cheung, head of Facebook’s Media Partnerships in the Asia-Pacific region, recalled “working closely” with its early media partners in the Philippines to begin rolling out Instant Articles locally.

“Internationally, publishers are already sharing thousands of Instant Articles on Facebook each day,” Cheung said. “Looking ahead, we’re excited to partner with more publishers here to bring the Instant Articles experience to more people,” he added.

Instant Articles was rolled out in the United States in October. Its list of launch partners included NBC News, The Atlantic, Slate, The New York Times, The Daily Mail, National Geographic and the Washington Post. TVJ