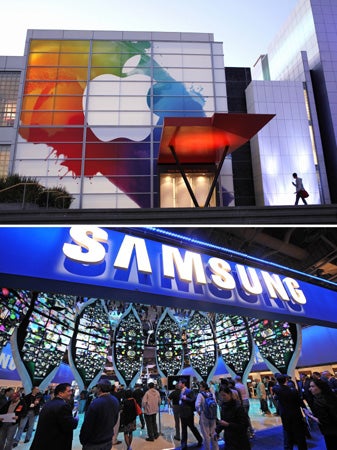 SAN FRANCISCO—Samsung has agreed to pay smartphone rival Apple just over $548 million in a years-long patent battle in federal court in California.

The South Korean electronics colossus said in a legal filing Thursday it will pay Apple the partial judgement awarded but that reserves the right to get money back if the amount is modified or overturned on appeal or if the validity of patents at issue is successfully challenged.

Apple said in the joint filing that it disagrees with Samsung’s contention that it has a right to be reimbursed.

A court in September awarded Apple the partial judgment. Samsung’s options narrowed to simply paying the money or trying to take its fight to the US Supreme Court.

The hefty sum is significantly less than the billion dollars Apple sought at the outset of the 2012 patent trial in Northern California, and doesn’t put to rest an argument over who should pay Apple’s legal costs said to total $1.8 million.

“Samsung has confirmed to Apple that it will pay Apple the $548 million partial judgment directly,” attorneys representing the companies said in the court filing.

The payment was to be made within 10 days of Apple delivering an invoice to Samsung on Friday, according to a joint filing.

In another sign that the long-running legal fight would drag on, Apple also asked the court for a green light to file a motion asking for supplemental damages for products that weren’t calculated into the award.

Arch-rivals Samsung and Apple decided last year to drop all patent disputes outside the United States, marking a partial ceasefire in a long-running legal war between the world’s two largest smartphone makers.

The companies have battled in close to a dozen countries, with each accusing the other of infringing on various patents related to their flagship smartphone and tablet products.

But neither has managed to deliver a knock-out blow with a number of rulings going different ways, and an announcement they agreed to drop all litigation outside the United States suggested a line was finally being drawn.

However, the agreement came with one key caveat, with the two giants stressing that they would continue “to pursue the existing cases in US courts.”