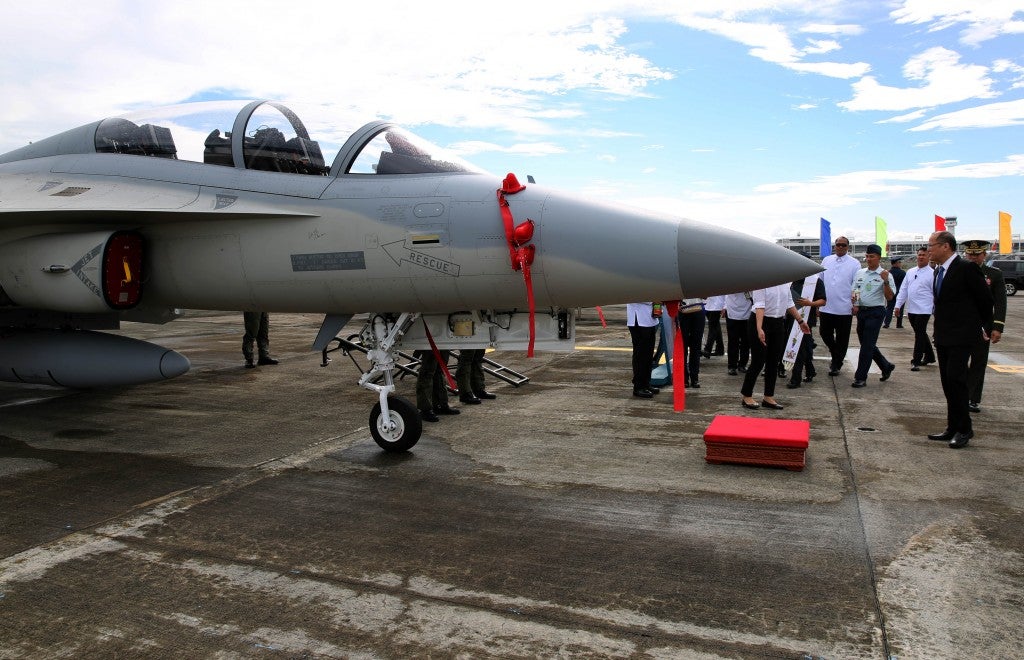 “This is the renaissance of the Philippine Air Force,” said PAF chief Lt. Gen. Jeffrey Delgado at the turnover ceremony Saturday.

The new aircraft are part of government procurements that were arranged since 2013: P3.4 billion for eight AW-109E attack helicopters from the Italian-based Agusta Westland, P18.9 billion for 12 FA-50PH jets from Korean Aerospace Industries and P5.3 billion for three C295M transport aircraft from the Spanish-based Airbus Defence and Space.

With the turnover of some of these purchases on Saturday at the Villamor Airbase—attended by the newly arrived President Aquino, fresh from his official trip to Europe—the Air Force now has in its possession eight new attack helicopters, two of the jets and two of the airbuses that it has purchased.

It is the first time in 10 years that the Air Force has acquired fighter jets, having retired the last of such aircraft in 2005.

“These FA-50PH will be employed to secure our land, aerospace and maritime territory, to include our [exclusive economic zone],” Delgado said in a speech.

“It can also be used for surveillance and reconnaissance missions, air interdiction and close-air support missions,” Delgado said.

Based on background documents furnished the media, the jets are particularly intended for security operations in the West Philippine Sea.

In an interview after the turnover ceremony, PAF chief of air staff Maj. Gen. Galileo Gerald Kintanar Jr. expressed the hope the jets could be deployed to the West Philippine Sea by 2018, after the pilots had been trained and the facilities at Antonio Bautista Air Base in Palawan were ready.

In the meantime, the new jets are to be based at Clark Air Base, while the Basa Air Base in Pampanga and the Subic Air Base are being repaired to equip them to handle “fighter operations,” Kintanar said.

The AW-109E, meanwhile, will “augment the dwindling number of MD-520MGs, the primary attack helicopters of the Philippine Air Force,” Delgado said.

According to a project description furnished the media, the Philippines’ current attack helicopter fleet is “barely capable of supporting the close air support requirements of the unified commands.”

Kintanar said that by the second half of 2016, some of the new attack helicopters would be deployed in Mindanao. “That’s where the aircraft will be needed for internal security operations. Hopefully, all of them will be deployed by early 2017,” he said.

“This will be a welcome addition in terms of capabilities. What is more important is that it has more capabilities to speak of. It can carry more ordnance and will be firing munitions with precision, and it can operate at night,” Kintanar said of the AW-109E.

Kintanar said the attack helicopters will be stationed in Sangley, Cavite, while the pilots are undergoing training.

The C295M, meanwhile, will be used for “territorial defense, combat support and disaster response missions of the AFP,” Delgado said.

Kintanar said the C295M is primarily for transport, as it can carry close to 70 personnel as well as heavy cargo. He said the C295M will have its home base in Mactan, Cebu, for maintenance, but will most likely be ferrying cargo and passengers regularly from Villamor Air Base in Metro Manila.