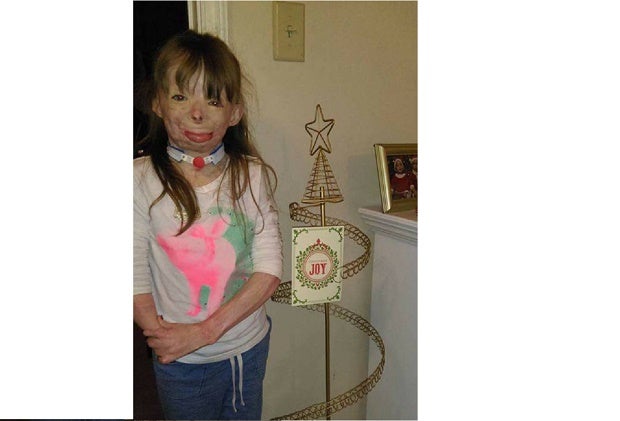 An eight-year-old girl who lost her family to an act of arson has only one Christmas wish this year—to receive Christmas cards to fill her card tree.

Two years ago, Safyre Terry’s father and three younger siblings were killed when their Schenectady, New York, home went up in flames. She survived thanks to her father, who used his body to shield her from the fire, but she suffered severe burns to over 75 percent of her body, and lost her right hand and left foot to subsequent operations.

Now eight years old and in the care of aunt Liz Dolder, Safyre still faces a long road to recovery, with another operation due in January.

Times are tough but Safyre is looking forward to one thing—Christmas. So Dolder went out and bought a Christmas card tree, which Safyre helped put up.

“When we got our first Christmas card, she was so excited. … It was just incredible,” Dolder told The Washington Post.

“I can’t wait to fill it up,” Safyre said, prompting Dolder to temper her expectations.

“Honey, that’s probably not gonna happen. We maybe get 10 cards a year, and the card tree holds 100,” she replied.

She needn’t have worried.

A Facebook post made by a family friend on Dec 5 calling for Christmas cards for Safyre went viral, attracting over 18,000 shares. Included in his post was the United States address to send the cards to—PO Box 6126, Schenectady NY 12306.

Word has spread further thanks to coverage on sites like Buzzfeed, and other social media.

Subsequent Facebook posts on Safyre Schenectady’s Super Survivor, a page detailing Safyre’s journey, show her clutching bundles of letters, overjoyed. “Your outlook on life makes me smile, and your undefeatable attitude is what makes humans amazing,” one card reads.

Another says: “You are a beautiful girl, and hope you will have a good Christmas.”

A post on the page, made on Wednesday (Dec 9), said: “When she said she can’t wait to fill up the card tree my response was I don’t think it’s gonna get filled up but I am sure we will get a few more cards. She BELIEVED and ALL of YOU are making it happen. THANK YOU…..FAITH LOVE HOPE TO ALL” Dolder told The Washington Post on Tuesday (Dec 8) that they had received close to 50 cards so far.

“I’m crying buckets, because when you’ve seen the ugly in the world, and then you see the world come together for her, it’s just more than words can say,” she said.