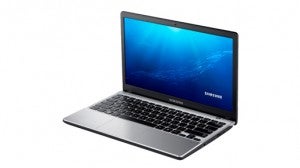 Chip maker AMD has come out with its own ultra-low voltage (ULV) processor called “Brazos” to challenge Intel’s stranglehold on this segment.

Similar to Intel’s Atom processors, AMD’s Brazos features microarchitecture technology, dual cores and thermals (or TDP) of 9 to 18 watts—features that serve to lengthen the battery life of the netbook and enhance performance.

As a result, Samsung has adopted AMD’s ULV processor to power up its Series 3 305U1A notebooks.

During the launch, Eric Sulit of Samsung Philippines said that with AMD’s Brazos, the new notebook gets to benefit much from Fusion technology. In other words, the netbooks powered by the new AMD processor can handle graphics better than Atom-powered devices.

As a low thermal processor, users of the Samsung notebook may enjoy battery life of up to eight hours.

The AMD processor provides the Series 305U1A with optimum balance of performance and energy efficiency, according to Sulit.

“It allows you to create rich media content, play intensive games, or multitask with applications like Microsoft Office,” Sulit added.

Weighing only 1.3 kg, the Series 305U1A features a slim bezel display, making the device much smaller and lighter, but without compromising on screen size.

The 11.6-inch HD-capable display is also anti-reflective, allowing the user to see clear images onscreen even when the notebook is being operated outdoors.

In addition to longer battery life, the notebook also features an intelligent charging technology called PowerPlus. It keeps up to 80 percent battery capacity, prolonging the lifespan of the battery.

It also has Samsung’s Fast Start technology for “instant on,” which is actually a hybrid sleep mode, combining the fast start-up of sleep with the stability of hibernation.

This allows a user of the notebook to get started within seconds of just opening the display or pressing the power button.

Apart from an ergonomically sculpted island-type keyboard, the Series 305U1A includes a 4-in-1 card reader, Bluetooth 3.0 and a range of USB and HDMI ports.

It comes pre-installed with Windows 7 Basic, which has some advantages over Windows Starter found in many netbooks. For one, Windows 7 Basic allows a user to open and run several applications simultaneously.

The Series 3 notebook also comes with Samsung Duracase that features a scratch-resistant surface. It secures the notebook from the harmful effects of bumps and knocks.

Suggested retail price for the Samsung Series 3, which comes in black, silver, pink, blue and purple, is P23,900.