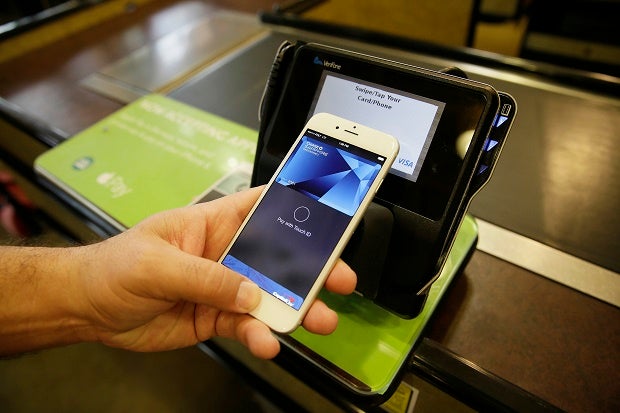 In this photo taken Friday, Oct. 17, 2014, Eddy Cue, Apple Senior Vice President of Internet Software and Services, demonstrates the new Apple Pay mobile payment system at a Whole Foods store in Cupertino, Calif. Everyone from Apple to Starbucks has introduced their own mobile payment system as smartphones have grown in popularity. Theyre hoping to capitalize on the expected growth of the sector: Forrester predicts that people using digital wallets to pay in stores will grow from $4 billion in 2014 to $34 billion by 2019. AP File Photo

SAN FRANCISCO, United States—Apple announced a major partnership with China UnionPay on Thursday to put is digital wallet to work in the world’s most populous country.

China UnionPay customers will be able to add their bank cards to Apple Pay on iPhones, iPads, or Apple Watch wearables, the companies said in a joint statement.

“China is an extremely important market for Apple and with China UnionPay and support from 15 of China’s leading banks, users will soon have a convenient, private and secure payment experience,” said Apple senior vice president of software and services Eddy Cue.

The service could be available early next year, pending approval of Chinese regulators.

Apple launched its digital wallet last year in a move capitalizing on the popularity of its mobile devices and taking on rivals such as Google and PayPal, which are also competing in the market.

ADVERTISEMENT
TOPICS: Apple, China, Internet, IT, personal finance, telecommunication, US
Read Next
Workers back off from clash with cops over solar project
EDITORS' PICK
LIST: What to expect in areas under GCQ, MGCQ
PNP to maintain checkpoints during GCQ to ensure compliance to health protocols
Notice of 2020 regular meeting of stockholders June 18, 2020
DOTr bares 2 phases of public transport revival in GCQ areas
SM prepares for ‘safe malling’
Leveling up your ‘lutong bahay’ with the kitchen companion you never knew you needed
MOST READ
LIST: What to expect in areas under GCQ, MGCQ
Duterte approves Metro Manila’s shift to GCQ starting June 1
DOH explains: Only 109 of record-high 539 COVID-19 patients were ‘fresh cases’
OFW back in Leyte hometown but tests positive for coronavirus
Don't miss out on the latest news and information.