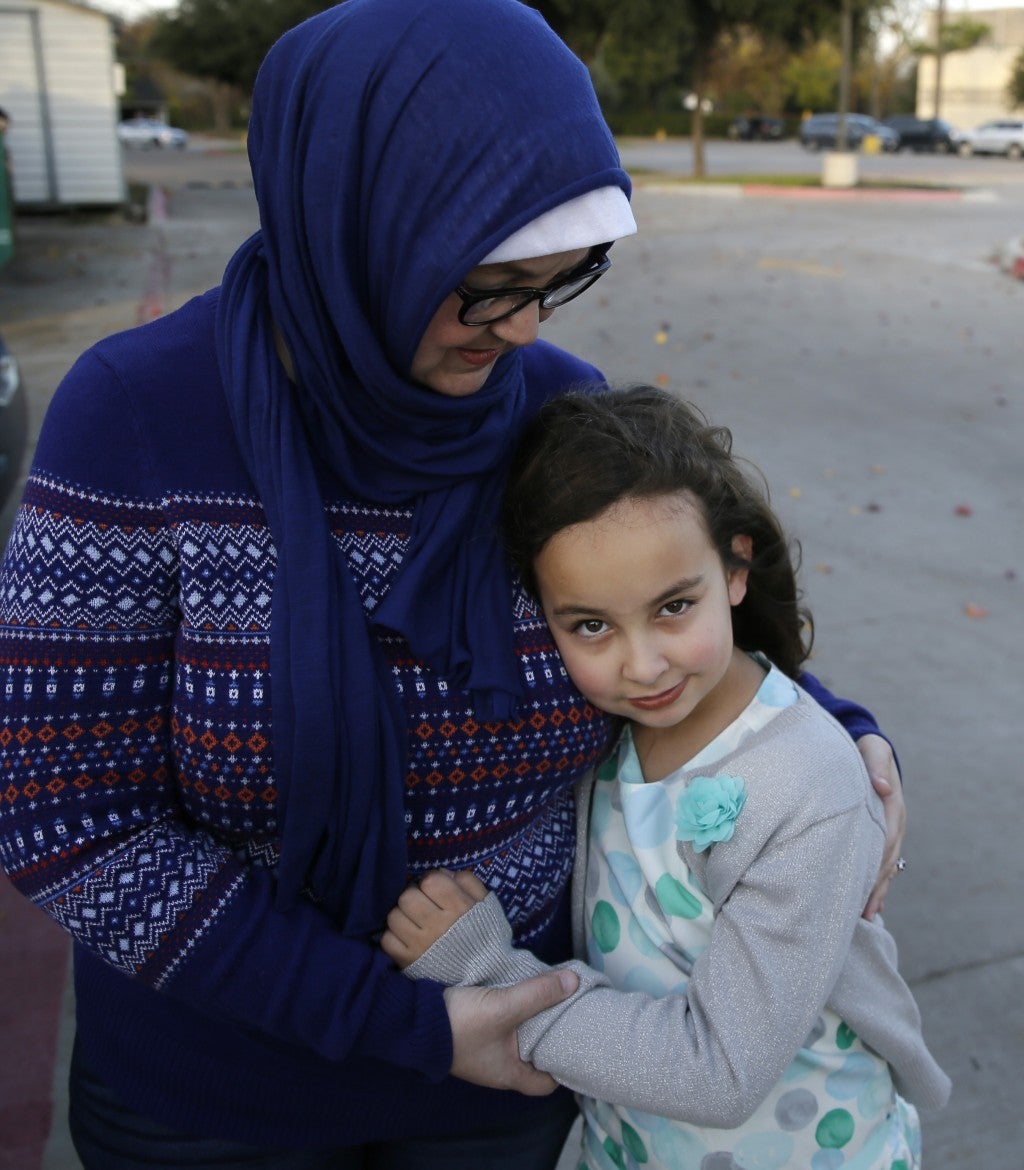 Sofia Yassini, 8, right, gets a hug from her mother Melissa Yassini after posing for a photo outsider a mosque in Richardson, Texas, Friday, Dec. 11, 2015. AP

DALLAS — Melissa Yassini and her 8-year-old daughter, Sofia, spend some time every evening reading messages from the thousands of people who have told Sofia not to be afraid just because she’s Muslim.

Sofia’s story of terror that she would be forced to leave America inspired a social media campaign with a hashtag, “#IWillProtectYou,” that has generated posts from soldiers, veterans and others supporting her.

“A lot of them, they call her out by name,” Melissa Yassini said on Wednesday. “That’s very important to her.”

Melissa Yassini originally shared her daughter’s response to Republican presidential front-runner Donald Trump calling for a ban on all Muslim immigration into the United States.

Sofia heard about Trump’s proposal while the family was watching the evening news. While Trump has said he isn’t targeting American Muslims, her mother said Sofia didn’t make that distinction.

She packed a bag with Barbie dolls, a tub of peanut butter and a toothbrush. And she checked the locks of her family’s home because she thought soldiers were coming to take her away.

Sofia was featured in a Dec. 14 Associated Press story about how Muslim parents across the United States are grappling with frightened children amid rising anti-Islam sentiment, including several incidents and proposals targeting Muslims in Texas. The Yassinis live in the Dallas suburb of Plano.

One reader, Kerri Peek, wrote about Sofia and called on soldiers to reassure her. Thousands did. Many posted messages of support with selfies of themselves in combat uniforms. The hashtag was trending in several cities this week.

Sterne told the AP Wednesday that he had seen in Iraq the importance of supporting people of all faiths and races.

He said he was particularly heartened by all of the posts from “my brothers and sisters in arms.”

“I would just tell her that hatred’s not going to win, that it’s OK,” Sterne said. “There are good people in the world, and the good people will always protect her from the evil people.”

Yassini said her daughter is less afraid, but still nervous. She blamed Trump’s comments about Muslims — which also include suggestions that he would require Muslims to register with the federal government or carry identification cards — for driving anti-Islamic sentiment.

“Trump’s words don’t just end at what he says on that podium,” she said. “It’s far more reaching than that. When he goes on and says these things, it almost legitimizes or empowers the general public that they can say what they feel with Muslims.”

The Trump campaign did not respond to a request for comment.