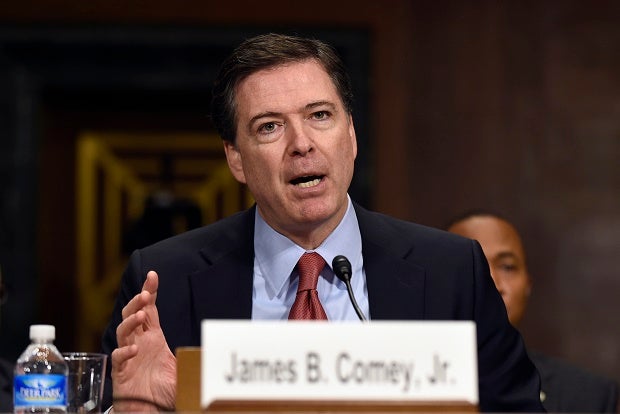 In this Dec. 9, 2015, file photo, FBI Director James Comey testifies on Capitol Hill in Washington before the Senate Judiciary Committee. With extremists finding fertile ground for recruitment online, the White House is dispatching top national security officials to Silicon Valley to seek the tech industry’s help in disrupting the Islamic State group and other terrorists. At a high-level session on Jan. 8, 2016, leaders from major technology and Internet companies will discuss ways to use technology to stop terrorists from radicalizing people online and spurring them to violence, according to a meeting agenda obtained by The Associated Press. Attorney General Loretta Lynch, Comey and Director of National Intelligence James Clapper are slated to attend. AP FILE PHOTO

At a high-level session Friday, industry leaders and government officials will discuss ways to use technology to stop terrorists from radicalizing people online and spurring them to violence, according to a meeting agenda obtained by The Associated Press.

But it’s unclear what will come of the meeting: While tech industry leaders say they want to be good citizens, they don’t want to undercut free speech or be viewed as government agents. And tech leaders have clashed with the Obama administration before over encryption of online data and messages.

Apple, Google, Facebook, Microsoft, Twitter and LinkedIn are sending representatives. While it appeared the government wants the companies to send their top executives, there were indications some were still deciding late Thursday who to send, and it couldn’t be learned Thursday if any CEOs will be attending.

The meeting Friday in San Jose, California, comes as the Obama administration tries to beef up cooperation with social-media groups and online companies whose platforms are often used by extremists to attract followers, disseminate their message and organize attacks. Obama said in a recent speech that he planned to “urge high-tech and law enforcement leaders to make it harder for terrorists to use technology to escape from justice.”

At Friday’s session, government officials plan to brief industry leaders on how terrorists use technology, including encryption. They also hope to discuss ways to make it harder for terrorists to use the Internet for recruiting and mobilizing followers.

Also on the agenda is a discussion of how the government and tech companies can “help others to create, publish, and amplify alternative content that would undercut” the Islamic State.

Another goal is to identify ways for law enforcement to better identify terrorists online and stop them from carrying out attacks.

Some of those goals may lead to thorny discussions. Leading Internet companies say they remove violent or threatening content that violates their policies, but they are reluctant to infringe on free speech. They also cite technical challenges to monitoring or policing the vast mountains of messages, photos and other material that are posted on popular online sites.

And particularly after the revelations two years ago about widespread data-gathering by the National Security Agency, tech companies are concerned about making sure that customers around the world don’t see them as agents of the US government.

The government, however, says that digital platforms are increasingly becoming tools of radicalization used by the Islamic State, a group Obama recently denounced as “bunch of killers with good social media.” Slick online magazines, highly produced videos and social networks like Facebook and Twitter have all played roles in the group’s propaganda machine.

After last month’s shooting in San Bernardino, California, Facebook found messages by 29-year-old Tashfeen Malik around the time of the attack that included a pledge of allegiance to the Islamic State’s leader, although there were no indications IS had directed the attack.

Confronting the Islamic State on the Internet has raised difficult questions for US policymakers about how to balance counterterrorism against privacy, civil liberties and the hands-off tradition that has fueled the Internet’s growth.

Especially thorny is the federal government’s desire for a way to circumvent encryption technology that individuals use to protect their privacy but that terrorists can exploit to keep their actions hidden from law enforcement.

In Congress, lawmakers have introduced legislation requiring social media companies to report online to law enforcement any terrorist activity they detect, such as planning, recruiting or distribution of terrorist material. But tech industry representatives have said new laws could result in excessive burdens and over-reporting of unhelpful data, complicating efforts to detect legitimate threats.