Apple’s iPhone is slumping. What’s next? 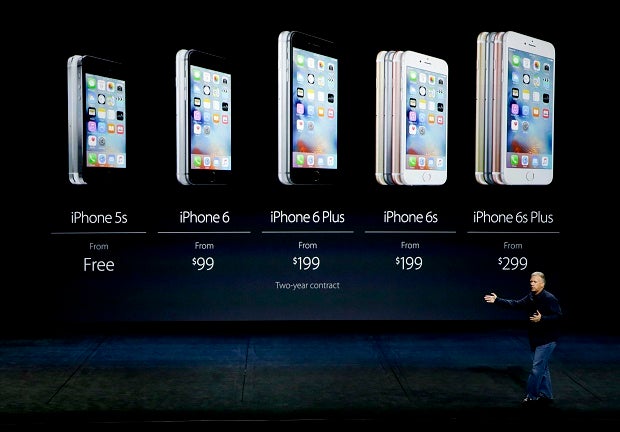 In this Sept. 9, 2015, file photo, Phil Schiller, Apple’s senior vice president of worldwide marketing, talks about the pricing of the new iPhone 6s and iPhone 6s Plus during the Apple event at the Bill Graham Civic Auditorium in San Francisco. Apple fans keep buying iPhones, but Wall Street keeps worrying the company won’t be able to match last year’s blistering sales pace. Those fears were compounded Wednesday, Jan. 6, 2016, when the Wall Street Journal said one of Apple’s most important contractors is sending some workers home on “early holiday” before the Chinese New Year in February. AP FILE PHOTO

SAN FRANCISCO — The bloom may be off Apple’s iPhone, at least for now. So now the pressure is on the iconic Silicon Valley company to come up with its next big thing.

On Tuesday, Apple acknowledged that it’s likely to see an uncharacteristic sales decline this spring, amid signs of global economic weakness and slowing overall demand for new smartphones. That drove Apple shares down more than 6.5 percent Wednesday, extending a months-long slide.

It’s almost certainly too soon to expect an Apple Car or even some yet-to-be-named, virtual reality iDevice to turn things around. Apple said it wouldn’t comment on its plans beyond what its executives said Tuesday. But among some analysts, hope springs eternal for what the next generation of iPhones — successors to the current 6S and 6S Plus — might bring.

Tech blogs have hinted at a thinner iPhone 7 with dual cameras and wireless earbuds — and minus the familiar headphone jack — to be released this fall. Other reports suggest Apple might also go back to the future with a 4-inch phone — last seen in Apple’s 2013 iPhone 5S — as a companion to the next generation of bigger-screen iPhones.

Apple faces “a few tough quarters ahead until we get to the build-up around iPhone 7 later this year,” said Daniel Ives of FBR Capital Markets, in a research note Wednesday. He suggested the next iPhones will “turn this ship back into growth waters.”

But others warn that even new phones may not be enough to spark the kind of sales frenzy Apple experienced after it launched the iPhone 6 and 6 Plus models with 4.7- and 5.5-inch screens in 2014. “We are not seeing any meaningful upgrades” or significant new features, wrote Rosenblatt Securities analyst Jun Zhang. “It is in our view that iPhone 7 will not sell as well as the iPhone 6.”

Apple doesn’t have many alternatives for near term growth. Sales of iPads and Mac computers both dipped in the last three months of 2015. In an interview, Chief Financial Officer Luca Maestri said the new Apple Watch had its strongest sales ever in the holiday quarter, but wouldn’t provide numbers.

Maestri and other executives say they expect sales of iPads, Macs and Apple Watches to grow in the future. And the company is widely believed to be working on other new products.

While an Apple car isn’t expected for several years, CEO Tim Cook may have hinted at another product category Wednesday, when he told analysts he doesn’t view virtual reality as a “niche” product.

Apple, meanwhile, stressed this week that it’s making more money — nearly $5 billion last quarter — from a growing stable of online services, from the App Store to Apple Music and Apple Pay. The message seemed aimed at reassuring investors who worry that Apple relies on the iPhone for two-thirds of its revenue, but several analysts said it was a positive sign.

New products and services may not replace the iPhone as Apple’s central revenue source, but they could provide the additional growth that investors want, said analyst Walter Piecyk at BTIG Research.

While the next iPhone could help Apple improve this year’s sales figures, he added, “I don’t think anyone’s expecting the return to hyper-growth that Apple saw in 2015.”

Passengers from Wuhan, China to be flown out of Kalibo, Aklan – CAAP