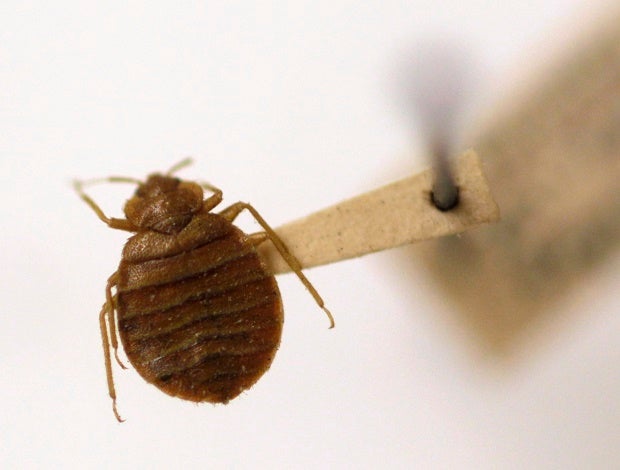 In this March 30, 2011, file photo, a bedbug is displayed at the Smithsonian Museum in Washington. Researchers from Weill Cornell and scientists at the American Museum of Natural History have traced the nefarious pest through the New York City subway system and discovered a genetic diversity among the bloodsucking creatures. AP FILE PHOTO

NEW YORK — Scientists have mapped the genome of bedbugs in New York City, then traced fragments of the nefarious pests’ DNA through the subway system.

In the grubby recesses of hundreds of stations, they discovered surprising genetic diversity among the bloodsucking creatures. The next step is to figure out how the information can be put to good use, such as to develop better insecticides or blood thinners.

But these goals will take further medical research.

For now, the focus is on two main players in New York life: the subway and bedbugs.

Scientists already have found that genetic traces of bedbugs in northern Manhattan are more closely related to those in the island’s southern part, while there are bigger variations between the Upper East Side and Upper West Side.

Geneticist Christopher Mason, who worked on the project, says the reason for that can be found simply by looking at a subway map: In Manhattan, for instance, subway lines run the length of the island north to south, while there’s no subway link through Central Park between the East Side and the West Side.

Not that bedbugs are riding the subway, noted George Amato, an evolutionary biologist at the American Museum of Natural History who also worked on bedbug project.

“Before this, people were just feeling their way through in the dark; this genome turns the light on for various areas of other research.”

A bedbug colony at the famed museum was used for the genome map. A similar map was assembled by an international research team at 36 institutions, including the University of Cincinnati.

The New York team’s resulting scientific paper on the subject was published Tuesday in Nature Communications. A second paper on bedbug genetics, from the University of Cincinnati, also appeared Tuesday in the same publication.

To learn how the bedbug has evolved and spread, the New York team took DNA sample swabs from 1,400 city locations including subway cars, turnstiles, ticket vending kiosks, and above ground places like parks.

Amato said there are many ways small fragments of the insects’ DNA, or DNA of a related species, could get into the subway — clinging to the clothes of some of the 6 million daily riders and their belongings, or washed down into the stations.

Amato said the first rough bedbug genetic sequence emerged about a year ago, but it took months to refine the model into an accurate genome.

“Before this, people were just feeling their way through in the dark; this genome turns the light on for various areas of other research,” said Amato. “Our team is now moving on to the genetics of cockroaches and other living fossils.”