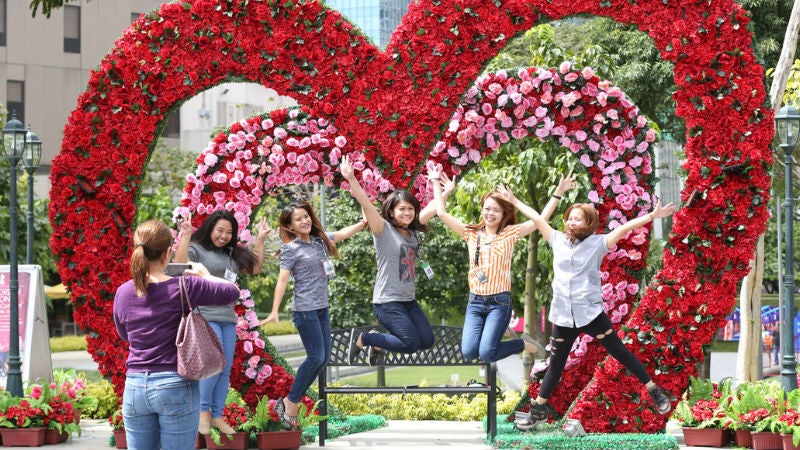 CONFIDENTLY POSING, WITH A HEART Young women strike a wacky pose under a heart-shaped arch made of roses set up at Bonifacio Global City in Taguig in time for Valentine’s Day. MARIANNE BERMUDEZ

Thanks to social media, the Internet and various dating apps, the love life of Filipino singles remains a lively but complex landscape filled with possibilities, dashed hopes, terrible dates and illicit relationships, as well as a constant search for committed relationships.

Inquirer’s series of interviews with singles revealed that because of hectic work schedules, young singles turn to Tinder, Happn, Grindr, Bumble, OKCupid, Filipino Cupid, Badoo and other dating apps, which also allow them to get into several relationships at the same time. Just to make sure one pans out, one single explained.

In these more enlightened times, single men think nothing of aggressively trawling the net for female partners, while transgenders are as bold about putting themselves out there, the Inquirer found out.

But men, it seems, still hold the cards. “The smarter the woman gets, the more difficult it is to find the perfect man,” rued one single in her 30s.

“I’d like to date, but I think no one wants to,” said Maria Clara, a 30-something doctor from Manila who has never been in a relationship.

Circumstances can get particularly desperate for single older women, the interviews indicated. With her male friends either married, engaged or gay, she has braced herself to settling for whatever comes, said Min, a 34-year-old from Taguig who works as an administrator. “In these times, it’s hard to be choosy,” she said.

Min, who caught her boyfriend cheating, had tried using Tinder to start dating anew, but found it awkward. “You see some of your friends or your officemates in it,” she said.

But good dates—one characterized by a lot of talking—are possible as well. “I really adore guys who can carry a good conversation,” said Guy’s Grace, a 34-year-old corporate counselor from Manila.

And that’s why Dick Dickens, 24, a marketing associate from Manila, finds dating difficult. Describing himself as “shy and introverted,” he finds starting conversations “painfully awkward,” he said.

Though he thinks he shouldn’t be dating right now, as his work demands too much of his time and attention, Dick said he is “open to a relationship” should he meet the right person and find a way “to balance work and personal life.”

Sarah, a 31-year-old public relations professional from Makati, recalled the best date she’d gone on recently: A full-day affair that started with breakfast at Salcedo Market, lunch and a massage in Tagaytay, and dinner at a Japanese restaurant in Makati.

After ending a five-year relationship with a boyfriend who was “always noncommittal about marriage,” Sarah has been dating men introduced by friends or those she met through Tinder and Happn. But “no casual hookups for me,” she said, adding that she wants something long-term.

She’s had a lot of bad dates, the worst being with “an arrogant guy, 6 feet tall, who was so proud of his height.

“When he saw me, the first thing he said was, ‘You don’t look 5’5”. He then insisted on dining al fresco so he could smoke, without even asking me if I was fine with that. I said I wasn’t, primarily because it was sweltering, but he insisted. As I was about to leave, he commented that my clothes were a little loose and I should wear something tight-fitting next time. I was surprised when he asked for a second date. ‘With you, I’m sure my kids will be beautiful and smart,’ he explained. Ano ako, palahian? (So now I’m a breeding sow?)”

But bad dates haven’t deterred her, said Sarah. “I still believe in finding love, even in places like Tinder. Or maybe I’m just stupid.”

Sab, 28, an ER nurse from Quezon City, doesn’t believe in using apps but relies on Facebook messages and friends to meet potential dates. That has not spared her from her share of bad dates, though.

One guy asked for a loan in the middle of their date, she recounted. “He seemed ideal—smart, well-educated, articulate, successful, driven and well-traveled. But on the second date, he borrowed money from me because he said he ran out of cash for gas, parking, etc. I was caught off-guard and was a bit embarrassed for him. He said his ATM card got damaged and he had left his credit cards somewhere. He promised to pay me back the next banking day, but he didn’t. Maybe he thought he was such a good catch he didn’t need to try to impress me. So wrong.”

TransJans, a 26-year-old transgender, has her own set of challenges. “It’s not very easy to find men who will date transwomen openly,” she said.   Dating sites and apps are “really more convenient” given her busy schedule, so now she lives by her philosophy: “Collect and collect then select!”

He added: “I multitask and people should do the same. I’ve had enough of closing my doors to other guys just because I’m dating one. What if it doesn’t work out? It’s nice to have options and it’s a waste of time to play hard to get. I won’t just sit here and wait for Prince Charming to get me.”

He thinks the same way, said 33-year-old Merlion, an IT employee in Singapore, who usually meets women at social events and through dating apps. “It’s hard to date just one person at a time because things might not work out—people get busy, one of you goes on a long trip, the girl gets flaky…”

His app of choice? “Coffee Meets Bagel. I found its pool of users interesting, a lot of professionals with impressive educational backgrounds, careers and stints living abroad.”

Francesca, 29, a marketing manager from Pasig, has met dates through common friends and Tinder since her relationship of six years ended in 2013. But though she’d like to start being active in the dating scene again (“I’m not getting any younger!”), she rarely uses Tinder anymore, she said. “Most guys there are looking for people to hook up with. I’m looking for a serious relationship.”

Maintaining their standards has left some women single and lonely, among them T, a

35-year-old entrepreneur and single mom from Quezon City. “It’s just so hard to picture myself as a kept woman. I don’t want to be labeled a home-wrecker,” she said of her relationship with a married guy. “For now I am keeping my doors open. I say the smarter the woman gets, the more difficult it is to find the perfect man.”

Sharon Ann Pereira, a 37-year-old single mom and restaurant supervisor based in Vancouver, also ended her relationship with a guy when she found out about his wife and kid back home. “I’m not dating right now because I’m not ready. My children are my priority,” she said.

For Missyvie, 39, age matters. “The playing field is no longer to my advantage. Guys are out chasing younger girls. (But) I have an account at Filipino Cupid because my friends said I’d be more attractive to foreigners, whatever that means.”

Lee, 22, a freelance consultant from Quezon City, said he has become more aggressive and dates several people at the same time. “Waiting for someone to come in a signed box is a losing game,” he said.

Though he’s “too scared” to   fess up, he makes sure they’d feel “we’re not exclusive yet,” Lee said of “past friends, friends of friends, or those he met through Tinder … because it’s so juicy there.”

He added of a guy he’s talking to right now: “He’s great. It’s just too bad we started off with infidelity. He’s not entirely single. But we have a great time. Thanks, Internet!”

PR manager Sari, 31, said she ended a two-year relationship with her boyfriend because “he said he couldn’t keep up with me and couldn’t see me in his future.” She’s not currently dating, she said. “I believe that light attracts light. Right now, I am dating myself and mastering self-love. I recently learned that it’s possible to be alone and not be lonely at all,” Sari said.