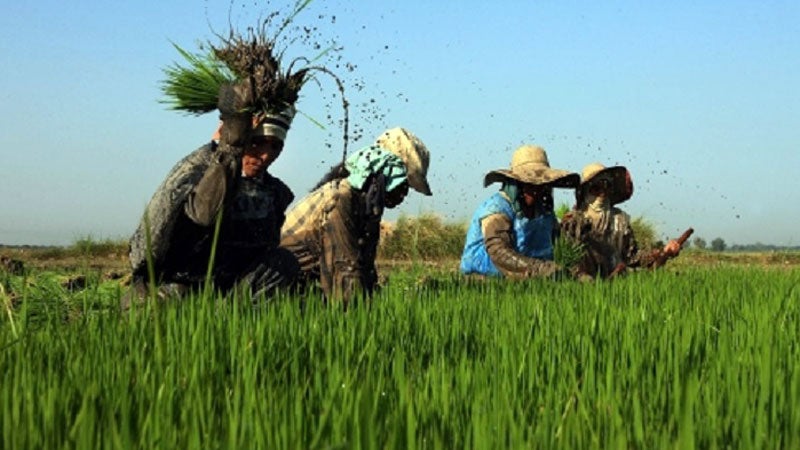 WITH the use of mobile phones becoming more ubiquitous as modern gadgets become more affordable, it is no surprise that even farmers in developing countries—traditionally seen as “low tech”—are now adding these to their farm tools.

In Tarlac, an initial batch of 18 small-scale rice farmers are taking part in the pilot run of a program that intends to popularize the use of information and communication technology to help them better manage their farms.

Dubbed “Rice Crop Manager” or RCM, the decision-support tool was developed by the International Rice Research Institute with funding from the Department of Agriculture through its food staples sufficiency program.

The DA-supervised Agricultural Training Institute (ATI), in partnership with Smart Communications, is testing the effectiveness of the RCM—particularly its text-messaging component—for eventual mass adoption.

FEATURED STORIES
TECHNOLOGY
2,000 iPhones given for free by Japanese gov’t to passengers stuck on ship due to coronavirus
TECHNOLOGY
Google gets in on the emoji mashup madness by launching ‘Emoji Kitchen’
TECHNOLOGY
Sleeping with your partner’s T-shirt could improve sleep as much as melatonin supplements, says study

At the kickoff of the pilot last December, select members of farmers cooperatives in the town of La Paz were equipped with low-cost packages of mobile phones with preloaded SIM cards. The participants tend farms in the barangays of Caut, Paludpud and La Purisima.

By harvest time, the expectation is that RCM has helped farmers increase their yield and net income.

The IRRI is still evaluating a version for Vietnam (also dubbed RCM) as well as four specialized versions for Uttar Pradesh, Odisha and Bihar in India.

Here in the Philippines, RCM comes as a mobile app for smartphones or a website accessible with a personal computer or laptop where farmers—with the help of extension workers, when necessary—go through a questionnaire of 15 to 25 questions. The questionnaire basically asks for data about the farm, location, source of water, the kind of seeds they intend to use, and so forth.

Participants receive text messages on site-specific recommendations from the RCM delivered through the DA’s Farmers’ Contact Center (FCC), which the ATI operates and manages.

Edilberto de Luna, national coordinator of the DA’s Rice and Corn Program, says the use of ICT, including text messaging, will make the implementation of agricultural extension activities easier.

“This (the pilot project) is only the beginning as we hope to upscale this project using the experiences that we will gain from this experiment,” De Luna says.

“There is a significant need to equip more Filipino farmers with understanding, necessary skills, tools and access to information so they could effectively cultivate their full potentials, thereby improve their livelihood,” he adds.

According to ATI director Asterio Saliot, the project also supports the agency’s effort to attract the youth to engage in agriculture through the use of modern technology.

The ATI’s e-Extension Program for Agriculture and Fisheries has three components —e-Learning, e-Farming and e-Trading.

“In the face of aging Filipino farmers and our vulnerability to typhoons, (we) are continuously forming partnerships to help uplift the lives of farmers and mitigate the effects of climate change,” Saliot says.

According to field tests for the earlier version of RCM in the Philippines (the latest is version 2.0), the IRRI said rice farmers in Isabela, Nueva Ecija, Oriental Mindoro, and Agusan del Norte increased their net income by about P4,000 per hectare for every crop cycle.

Early efforts were mainly web-based but the text-based component was added to give the project a wider reach.

However, it turned out that four in every five of the 150,000 farmers who signed up for RCM did not provide mobile phone numbers, suggesting that they had now direct access to such devices.

This is now being addressed through the partnership with Smart, which donates handsets that will serve as test units to further study the effectiveness of the RCM as used by farmers.

Even as RCM for rice farmers is being fine-tuned toward mass use, another version for corn farmers—called Corn Crop Manager—is under evaluation at the IRRI.

Saliot, the ATI director, says he looks forward to the success of RCM and for its expansion to other crops like corn and vegetables, and also for the inclusion of weather advisories. TVJ

Franchise renewal of ABS-CBN not a press freedom issue – Cayetano