With its new S7 phone, Samsung looks even more like Apple 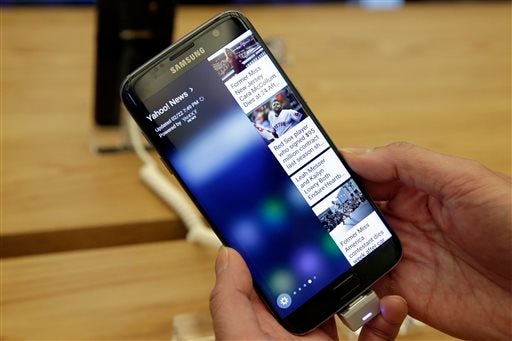 A Samsung Galaxy S7 Edge mobile phone is displayed during a preview of Samsung’s flagship store, Samsung 837, in New York’s Meatpacking District, Monday, Feb 22, 2016. Samsung is opening what it calls a “technology playground” in New York for customers to check out its latest gadgets. The center opens Tuesday, the day Samsung starts taking orders for its upcoming Galaxy S7 and S7 Edge phones. AP

NEW YORK — Apple and Samsung phones, which have been looking more and more alike over the past few years, are much closer to virtual twins with Samsung’s latest Galaxy S7.

The convergence began two years ago when iPhones got larger, mimicking Samsung’s once-innovative, plus-sized “phablets.” Last spring, Samsung started emphasizing higher quality materials and sophisticated design, just as Apple had for years. And last fall, Apple boosted the resolution on the iPhone camera, narrowing one of the major gaps it had with Samsung.

With the S7, Samsung is lowering its camera’s resolution — you read that right — to match the iPhone’s 12 megapixels.

To be sure, there are key differences. Only the latest iPhones have special features you activate by pressing harder on an icon or link, while Samsung is among the biggest boosters of virtual reality.

It’s too early to say which phone is better. Though Samsung announced the S7 on Sunday at a wireless show in Barcelona, Spain, the phone isn’t coming out until March 11. My hands-on time has been limited to controlled settings.

And for most users it may end up being a draw — Samsung leads the pack among Android phones, while Apple has its own self-contained ecosystem, iOS. For many, a choice between the two could come down to preference for one system or another — and the apps available for each.

For now, here’s how Apple and Samsung phones stack up:

For both, the rear cameras are now at 12 megapixels — up from 8 for iPhones and down from 18 for Samsung. That doesn’t mean Samsung photos are getting worse, though.

In making the change, Samsung adopted the iPhone’s 4-by-3 dimension, ditching the widescreen format it had long used. Widescreen produces vertical shots that are awkwardly tall, such that I’ve had to crop them to 4-by-3 anyway. The 6 megapixel reduction is equivalent to chopping off the excess.

The front cameras are both at 5 megapixels, after Apple boosted its resolution in the iPhone last fall. Apple also turned the screen into a flash for selfies. Samsung, ever the fast follower, is now doing the same with the S7.

Samsung is promising improvements in low-light shots, borrowing techniques from full-bodied, SLR cameras, though it’ll require extensive tests to see how well the camera performs. Even with last year’s models, Samsung cameras tend to produce brighter night shots than the iPhone. But I’ve also seen more distortion when those shots are blown up. We’ll see if that’s been fixed with the S7.

Samsung’s 5.1-inch Galaxy S7 is slightly larger and heavier than the 4.7-inch iPhone 6s, but not much so. There’s a premium version of the S7 called the S7 Edge; both sides curve like a waterfall, such that the screen flows over the side to the back of the phone. The Edge screen is 5.5 inches, but much of that comes from the curvature. The phone itself is taller, but just a tad wider and heavier.

Compared with the 5.5-inch iPhone 6s Plus, though, the S7 Edge is smaller.

Neither the iPhone nor the S7 phone lets you replace the battery with a spare. But the S7 does let you add storage. And the base model is 32 gigabytes, double what the iPhone offers for starters.

Unlike the iPhone, the S7 is waterproof. There’s no need to keep USB and other ports sealed, as past waterproof phones did. The S7 also offers wireless charging; you simply lay the phone flat on a charging base. However, wireless charging is typically slower than plugging in a USB charger.

Apple and Samsung both let you unlock phones with your fingerprint rather than a passcode. And both let you make payments with a tap at some retail stores. The Samsung Pay service works with a greater range of merchants, but with credit cards from fewer banks and in fewer countries for now than Apple Pay.

The latest iPhones and the S7 Edge have shortcuts to common tasks, such as taking selfies. With the iPhone, you hard press on an app icon. With the Edge, you swipe from the right edge. That swipe also gets you headlines, frequent contacts and favorite apps.

Apple lets third-party app makers create their own shortcuts, while Samsung does not.

Samsung is ahead of Apple, though it faces competition from other Android manufacturers, including LG.

Samsung already has its own VR headset, while LG is coming out with one. They won’t work with each other’s phones or any other Android phone. Both companies will soon sell 360-degree cameras for taking VR video. Apps on the phone will ease sharing with friends and viewing on the VR devices.

The iPhone 6S and 6S Plus have been available since September. There has been speculation that Apple is coming out with a smaller model soon, but it’s not expected to have all of the advanced features found in the 6S phones.

Advance orders for the S7 phones started this week. March 11 is the release date in the U.S. and several other markets. TVJ