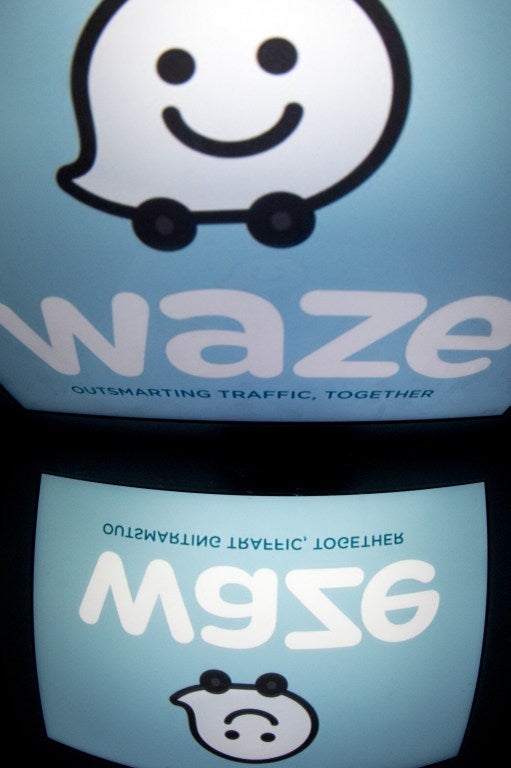 The logo of mobile app “Waze” is displayed on a tablet on January 2, 2014 in Paris. Waze is a community-based traffic and navigation app. AFP

The company said the soldiers were at fault, with a setting that tells the app to avoid “dangerous areas” having been turned off and the driver having deviated from the suggested route.

The app was founded by two Israelis and won a major prize at the 2013 World Mobile Congress before being bought by Google the same year for more than $1 billion.

Waze calls itself the “world’s largest community-based traffic and navigation app” — allowing millions of users to update constantly on traffic jams, police checks and short cuts to help each other shorten their journeys.

Yet it has occasionally hit roadblocks with government officials and angry users:

December 2014 – Residents of previously quiet streets in Los Angeles accused the app of ruining their quality of life as traffic was directed through their neighbourhoods. Angry residents took to reporting fake car crashes and traffic jams in a bid to stop the flow, US media reported. The company argued it was simply helping users save time.

January 2015 – The chief of the Los Angeles Police Department accused the app of helping criminals as it allows members of the public to report the positions of its officers. “I am concerned about the safety of law enforcement officers and the community, and the potential for your Waze product to be misused,” the police chief wrote, though civil rights groups defended the app.

August 2015 – Israeli media reported that the mayor of Jerusalem complained to Waze over the app’s directions, which implied parts of the city were under the control of the Palestinian Authority and directed users to avoid those areas. Israel considers all of Jerusalem under its authority, though the international community does not recognise this.

October 2015– A Brazilian woman was shot dead in front of her husband after the app directed them into a gang-controlled favela, international media reported. The couple were trying to take a short cut to the beach when they got lost. TVJ