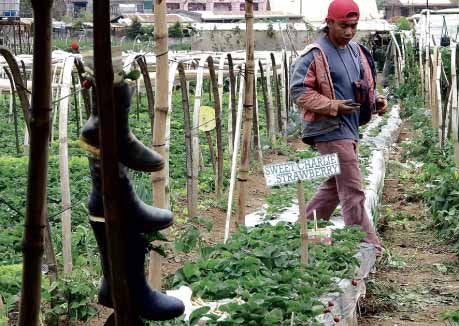 GARDENING boots may eventually wear out, but farmers put them to good use as containers in which they grow strawberries.

LA TRINIDAD, Benguet—Farmer Jericho Salipio was in his teens in the 1990s when a tourist asked him a bizarre question: “Where are the strawberry trees?”

The query made him realize this was a common misconception among lowlanders.

Fellow farmers always take time to educate tourists about berries that they pluck from vines grown at the strawberry farms here—for a fee.

This month, however, visitors will pick strawberries from berry “trees” or “towers,” owing to technology and common sense, Salipio says.

Instead of relying on small parcels of land, farmers have built elevated platforms atop their rows of strawberry plants where they prepare an extra row of soil to double their yield.

The berry towers are added attractions for visitors who return for a chance to pick the berries themselves, an experience which farmers believe is their real advantage against imported fruits.

“How can we compete with the likes of China, in terms of [strawberry] volume? The experience of picking strawberries and exposing tourists to real vegetable gardens is our true edge against importation,” Diego says. 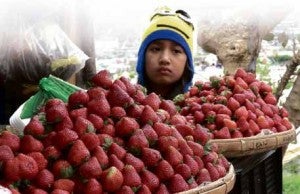 THE LARGEST strawberries displayed and sold in local markets in La Trinidad, Benguet and Baguio City.

The ATBI program was piloted at the 4.75-hectare strawberry fields in Barangay Betag here in 2010. Salipio is one of the first farmers who enrolled in the program, which has been introducing new technology to help them cope with Asian competition.

He says the ATBI program helps him innovate. His 1,000-square-meter garden was too small and there was not enough land for expansion. “I decided to build the strawberry tower for more yield. And it works,” he says.

Salipio says he is designing wider and taller towers.

Baltazar Tudayan Jr., another farmer enrolled in the program, has set up a similar innovation for his farm and calls it “two-story farming.”

“We are experimenting. We try out our ideas and improve on them as we go along until we get the best results,” he says.

Tudayan intends to plant “Baguio” beans at his two-story garden plots. “Imagine the beans climbing and the strawberries hanging. It will be an attraction, don’t you think?” he says.

THE BEST times to pluck strawberries from the gardens of La
Trinidad, Benguet are February and March.

Diego says the ATBI program also helps develop the technical, entrepreneurial and social skills of farmers. Farmers are also trained in business and marketing, with some of them employing people who guide tourists to their farms.

Jacinto Lapuz, 51, one of the farms’ “tour marketers,” says they were hired because they speak Filipino and English and can talk about the history and process of growing strawberries in La Trinidad Valley.

He gets P250 a day and a share from the fees paid by tourists. On a good day, tourists have been willing to pay as much as P600 for a basketful of strawberries they pick themselves, he says. 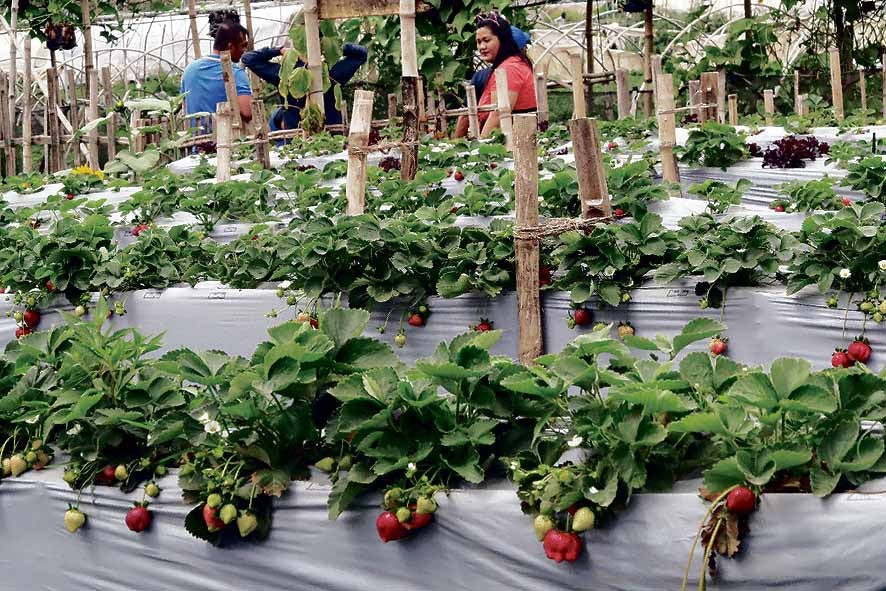 According to Diego, a marketing pavilion has been set up near the strawberry fields where farmers sell their produce. The farmers are trained to manage and man their shops.

ATBI advocates indigenous agricultural practices. “The most important indigenous knowledge is to take care of the land. We indigenous peoples value land as a source of life. We are very good at it, we just forget about it,” Diego says.

At present, 48 farmers are enrolled in the ATBI program who cultivate 500 to 1,000-square meter gardens.

Tudayan says, “I survived without borrowing money from the loan sharks because of what I learned from the program.” With a report from EV Espiritu, Inquirer Northern Luzon