Share your fitness data for an Apple Watch…or cash 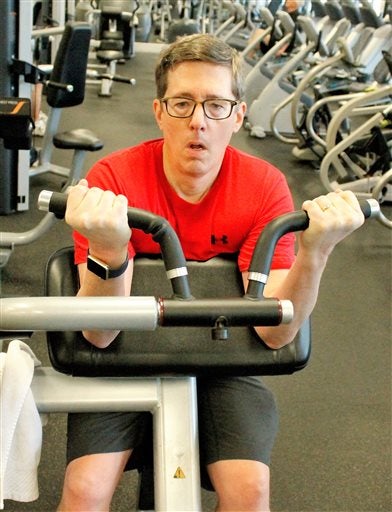 Mark Holloway of Clemmons, N.C., goes through part of his exercise routine at the Jerry Long YMCA in Clemmons, Tuesday, March 1, 2016. Holloway got a $350 Apple Watch for just $25 by meeting exercise goals for two years. The program was offered through three U.S. companies. (AP Photo/Skip Foreman)

NEW YORK — You know you need to exercise more, but there’s always next week, or the week after? To entice you to stop procrastinating, your company or insurer might soon reward you for wearing a fitness device to track your steps, heart rate and more.

For instance, in one program expected to be announced Wednesday, some workers can buy a $350 Apple Watch for just $25 by meeting exercise goals for two years. Vitality, a provider of disease-prevention and lifestyle programs, is initially bringing the offer to U.S. employees at three companies, along with John Hancock life-insurance customers. It has been testing the program in South Africa since December.

Other programs let you can redeem points from fitness activities for gift cards and other rewards. Submit to biometric screenings and nutrition classes, and in some cases you can earn cash in the form of insurance discounts.

“We all live busy lives, but the truth is, if doctors could write one prescription for the world, it would be activity,” says Jeff Williams, Apple’s chief operating officer. “The beauty of this program is members are going to get healthier.”

Adrian Gore, CEO and founder of Vitality parent company Discovery Group, says that for many people, the benefits from exercise might not be apparent for a few decades. Reward programs make the payoff more immediate.

Programs like these are still new, but appear to be expanding as part of broader changes in the health-care marketplace. Oscar, which sells health insurance directly to consumers, has been giving out free Misfit trackers for opportunities to earn up to $100 a year in Amazon gift cards. Fitbit works with employers such as Indiana University Health and Emory University in Atlanta to subsidize fitness trackers for their staff. In turn, employees who exercise are eligible for insurance discounts or drawings for big prizes like vacations to the Caribbean.

“I love playing sports, but doing cardio stuff isn’t my favorite,” says Brett Broviak, 43, an IU Health employee in Noblesville, Indiana, whose daughter challenged him to hit 1 million steps a month on his discounted Fitbit. “It kind of made it exciting to really push myself.”

These programs are typically voluntary, but you must be willing to share data to earn the most rewards and insurance discounts.

Sound creepy? Program officials say that data from fitness trackers typically go to outside administrators, such as Fitbit or Vitality. Employers and insurers get only broad totals to verify eligibility and not details on heart rate and sleep. But participants need to trust that these systems won’t get hacked. 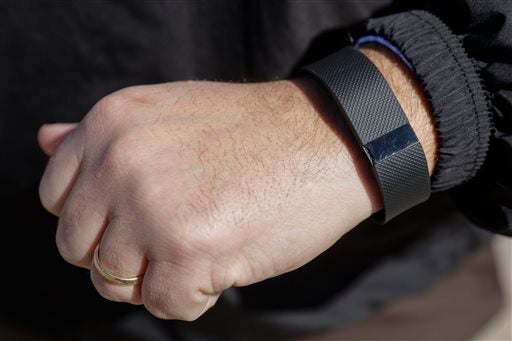 In this Monday, Feb. 29, 2016, photo, Brett Broviak, a manager of respiratory and sleep services at IU Health North Hospital, shows off his Fitbit fitness tracker for the camera on the hospital’s campus in Carmel, Ind. Companies and insurers looking to reduce health-care costs are turning to incentives and may soon start rewarding you for wearing a fitness device that tracks your steps, heart rate and more. AP

There’s no proof that providing fitness trackers directly lowers health-care costs, but there’s plenty of evidence that exercise leads to better health, which in turn can improve productivity and reduce absences. Michael Staufacker, Emory’s director of health management, describes the thinking as a “value of investment and not a hard-dollar return on investment as it relates to medical or pharmacy costs.”

More importantly, reaching daily exercise goals is just the beginning of getting people to think more about their health.

“If I exercise regularly, then junk food just doesn’t appeal to me,” says Mark Holloway, 55, of Clemmons, North Carolina, who participants in Vitality’s wellness program through his employer, Lockton. “French fries and hamburgers? No, thanks. It’s like putting sand in your gas tank.”

Programs from Vitality and others typically won’t let you earn insurance discounts simply by exercising. You’ll need to earn additional points by completing questionnaires and getting flu shots. You sometimes get bonus points simply by staying within recommended limits for cholesterol, blood pressure and other measures. Smokers can also get points for joining programs to help them quit.

“You change one thing about your behavior, and you can be more motivated to work on these other aspects,” says Tammy Smith, who manages the employee wellness program at IU Health.

DaVita HealthCare Partners says health-care spending by its employees slowed significantly after it offered tracker-based incentives through Vitality. But DaVita also increased the deductible on claims and started such initiatives as Fresh Fruit Wednesday. That makes the effect of the fitness program difficult to isolate.

With the Apple Watch program, participants must pay back Vitality for every month they miss their fitness goals, which typically call for four substantial workouts a week. The goals are meant to be achievable, but tough enough to encourage a change in lifestyle. Participants qualify for smaller discounts by meeting some of the goals and can get more expensive models by paying the difference. Bonus point offers are sent to the watch.

An iPhone is required; Vitality has no current plans to offer anything similar for Android. Neither Apple nor Vitality would provide financial details on the arrangement. TVJ