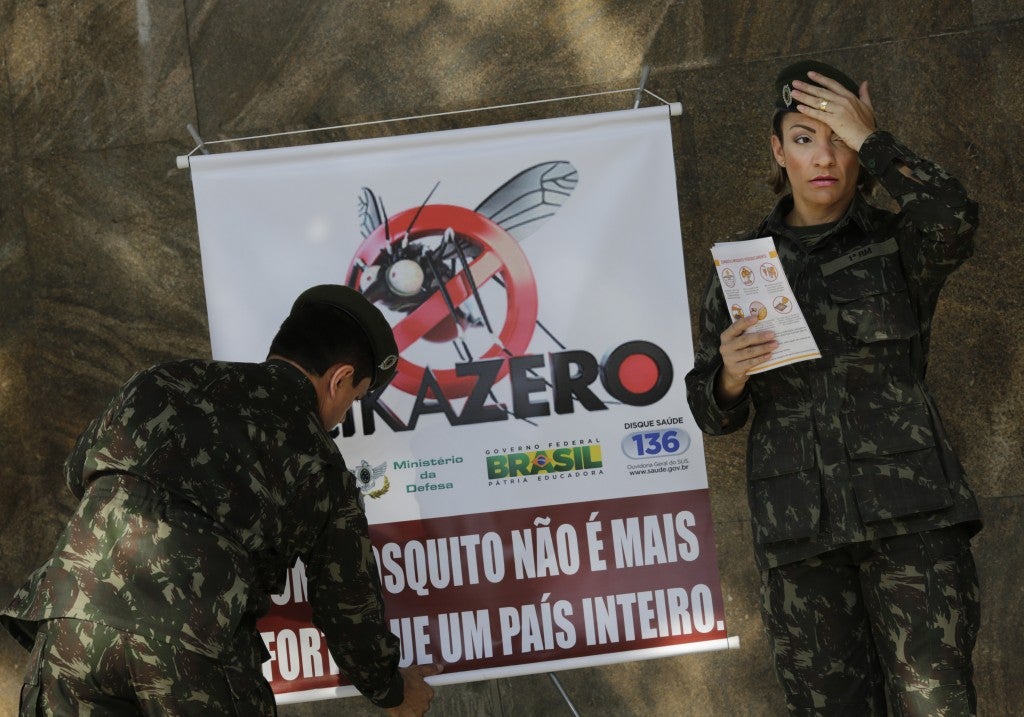 In this Saturday, Feb. 13, 2016 file photo, army soldiers set up a sign that reads in Portuguese “A mosquito is not stronger than an entire country” at the Central station in Rio de Janeiro, Brazil, as troops across Brazil try to tackle the Zika virus. AP

SAN FRANCISCO — Google on Thursday said that it is working with Unicef to map the spread of Zika and pitching in a million dollars to support the group’s efforts on the ground.

A volunteer team of Google engineers, designers and data scientists is helping Unicef build a computer platform to analyze data from sources such as weather and travel patterns to predict potential outbreaks, the director of the Internet giant’s charitable arm said in a blog post.

“Ultimately, the goal of this open source platform is to identify the risk of Zika transmission for different regions and help Unicef, governments and NGO’s decide how and where to focus their time and resources,” said Google.org director Jacquelline Fuller.

“This set of tools is being prototyped for the Zika response, but will also be applicable to future emergencies.”

The million-dollar grant to Unicef was intended to go toward cutting mosquito populations; developing diagnostics and vaccines; awareness, and prevention, according to Fuller.

Google also launched a campaign to match employee donations, with a goal of providing an additional $500,000 for Unicef and the Pan American Health Organization efforts to fight Zika.

Google ramped the amount of Zika-related health information, and the number of languages in which they are provided, at its search engine and backed YouTube videos aimed at raising awareness, Fuller said.

The rapidly spreading Zika virus, which has affected more than 20 Latin American countries, is suspected to be the cause of a sudden increase in cases of neonatal microcephaly, a severe deformation of the brain and skull among newborns.

Brazil has been hardest hit.

Countries throughout the region have launched operations to eliminate pools of stagnant water where the mosquitoes, which also spread dengue and chikungunya viruses, can breed.

Cuba has detected the first case of Zika in a Venezuelan doctor who came to the island for postgraduate studies, the health ministry said Wednesday.

The 28-year-old woman, who arrived in Cuba on February 21, is hospitalized at the Pedro Kouri Tropical Medicine Institute in the capital Havana.

Research begins into possibility of a vaccine for Zika virus