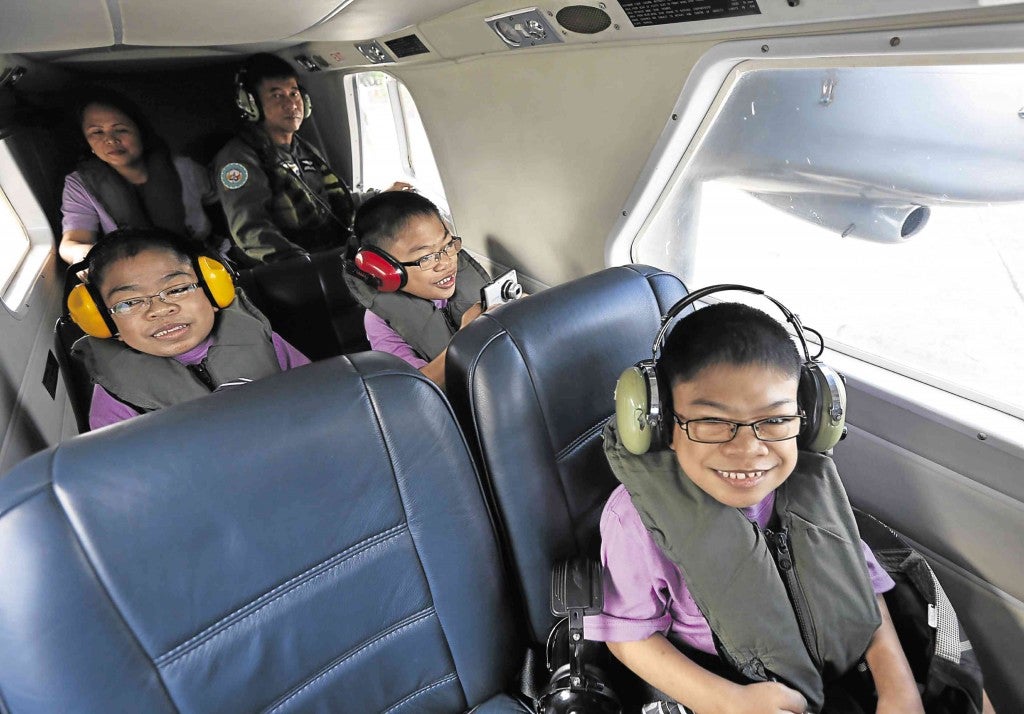 SANGLEY POINT NAVAL BASE, Cavite City—From the moment the Philippine Navy’s Islander aircraft took off and flew across Cañacao Bay on Saturday morning, the three boys aboard grinned from ear to ear, their eyes gleaming with joy.

Twins Peter John and John Paul Parco, 19, and their younger brother Vicente Isaac, 18, were like children, free from worries about Hunter Syndrome, a rare birth defect that had stunted their development.

The three boys, along with 32 children suffering from rare disorders, were treated to a fun-filled day, flying and sailing with the Philippine Navy as part of the celebration of the 9th World Rare Disease Day on Feb. 29.

The daylong event, called “Fly and Sail with Rare,” was organized by the Philippine Society for Orphan Disorders (PSOD), a nonprofit organization supporting individuals with rare diseases, in partnership with the Philippine Navy and groups like Photography with a Difference and Makati Camera Club.

“Our purpose is to involve them and let them experience what otherwise they would not have experienced,” Cynthia Magdaraog, PSOD president, said in an interview.

John Chua, a commercial photographer and founder of Photography with a Difference, said the project was aimed to give the patients a day without worries.

“We want them out of their normal routine, to enjoy life, fly on the plane and ride the boat,” Chua said.

At 5 a.m., the patients, together with their parents and guardians, hopped into a bus for the ride to the Philippine Navy base at Sangley Point, a former US Navy station.

First, they flew on the Islander, a 10-seater, fixed-wing aircraft that the Philippine Navy uses for patrols in the West Philippine Sea, waters within the Philippines’ exclusive economic zone in the South China Sea.

For 10 minutes, the patients enjoyed bird’s-eye views of Cañacao Bay, the body of water off the northeastern tip of  Cavite, and the skyline of Cavite City, the provincial capital.

“We will go to Scarborough Shoal, yehey!” Peter John joked, referring to Panatag, a shoal off Zambales province where Philippine and Chinese vessels faced off for two months in 2012 and which China seized after a US-brokered end to the standoff.

After the flight, the patients cruised Cañacao Bay aboard a Navy gunboat.

Pamela Roman, mother of Julia, 15, who has Rett Syndrome, a genetic disorder that afflicts girls, said there was a need to raise awareness of rare diseases.

Of the 100 million Filipinos, about 5,000 are afflicted with rare diseases, also known as “orphan diseases.”

“They are so few. Sadly, we are underfunded while their medical needs are expensive,” Roman, a full-time mother, told the Inquirer.

Roman said some people in the government overlooked people with rare disorders, giving priority to those with command diseases.

She bewailed the lack of awareness of rare disorders in the Philippines, even among doctors.

At 2, Julia began to lose her speech and motor abilities, Roman said.

“When Julia was confined at 5, I had to print brochures about Rett syndrome to give away to the doctors and nurses so I didn’t have to keep on saying what it is,” she said.

Roman said she wanted to treat Julia like an ordinary child. For her, she is like her two other children, both of whom are healthy.

On Saturday, she brought Julia on a wheelchair to the Navy’s base here to make her enjoy the plane and boat rides with the other patients.

The measure would create an Office of Rare Diseases in the Department of Health, encourage research and development, and provide for fiscal and regulatory incentives for the manufacture and importation of treatments for rare disorders.

Already approved by Congress, the bill is now awaiting the signature of President Aquino.

“We hope President Aquino will sign it into law and not veto it,” Magdaraog said.