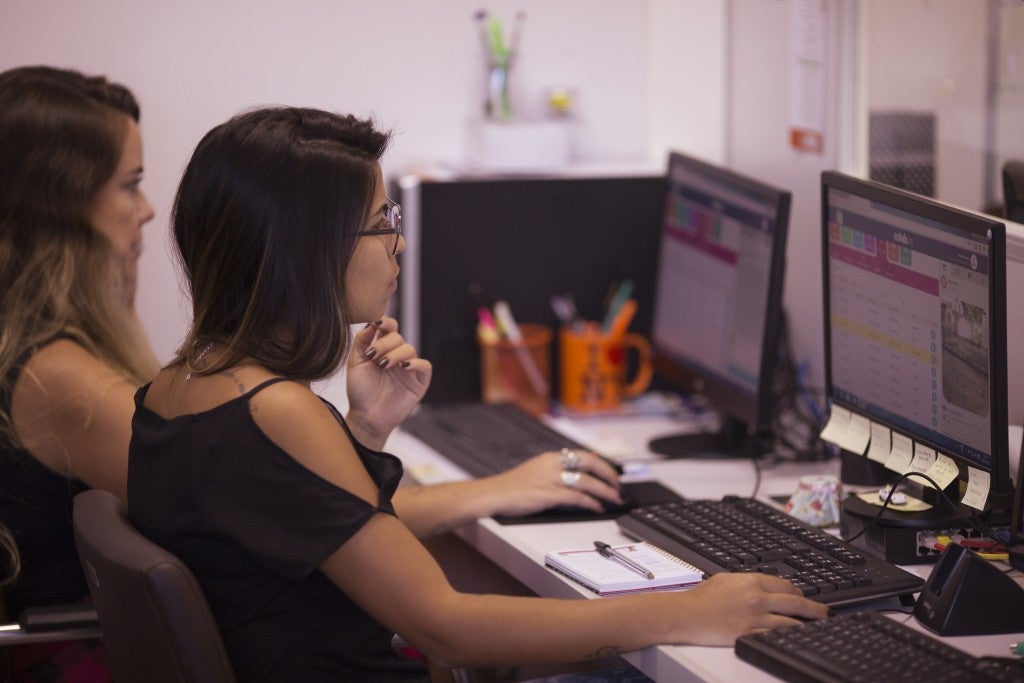 City workers check photos of possible breeding places of the Aedes aegypti mosquito, that are sent via an app called “Sem Dengue,” or “Without Dengue,” in Niteroi, Brazil, Tuesday, March 8, 2016. Niteroi City Hall is using the app developed by the startup Colab.re to identify possible breeding grounds for Aedes Aegypti responsible for transmitting dengue and Zika. AP

NITEROI, Brazil — For Luciana Santos, doing her part in Brazil’s fight to control the mosquito that spreads the Zika virus, dengue and other diseases is as easy as a couple of clicks on her smartphone.

Santos lives in Niteroi, a beachfront city near Rio de Janeiro where authorities recently launched an app called “Sem Dengue,” or “Without Dengue.” It allows residents to report stagnant water that can serve as a breeding ground for the Aedes aegypti mosquito.

Brazil has stepped up its fight against Aedes since researchers here linked an outbreak of Zika virus with a surge in cases of microcephaly, a rare birth defect that leaves babies with unusually small heads and brain damage that can cause mental retardation and a host of long-term problems.

So when Santos recently came across several puddles swimming with mosquito larvae while strolling on Jurujuba Beach with her parents and son, she snapped a photo and sent the shot through the app. The app’s geo-locator function automatically tagged the picture with the exact spot it was made and sent a detailed alert to City Hall. Within 72 hours, officials had deployed a team to deal with the puddles.

“It’s a way for us to help our city, (which) is our role as citizens,” said Santos, a manager of an oncology clinic who says she has seen many friends and relatives catch both Zika and dengue. “They (City Hall) have no way of seeing everything, but the population’s help contributes a lot” to rooting out mosquitoes.

Dotted with washed-up trash and debris and lined with small wooden fishing boats, Jurujuba Beach is rife with potential mosquito breeding spots. When it rains, everything from the hulls of boats to plastic ice cream tubs and bottle caps fill with water, creating places where the insect can lay its eggs.

The beach has become a regular stop for Niteroi’s around half-dozen mosquito inspectors, who thanks to the app are now responding to ever-increasing numbers of complaints.

Since its launch earlier this year, the app has generated hundreds of complaints, Mayor Rodrigo Neves said. He said many of the reports pinpoint sites inside residential complexes or other private buildings that would be hard for the inspectors to find on their own.

It’s had the added benefit of increasing people’s awareness of their surroundings and their own habits in this city of 490,000 people, Neves said.

“I think the ‘Without Dengue’ app is without a doubt quite a successful strategy to mobilize the local community for the fight against Aedes,” he said, adding that the app was among several tech-based solutions that Niteroi has rolled out recently to better understand citizens’ needs and demands.

For Helio Costa, one of the agents deployed to sites reported through the app, a behavioral sea change is needed to win the fight against Zika. He said he rounds up as much trash, dumps out as much water and uses as much larvacide as he can, but until people stop filling the streets with litter where water can collect, they will be in a tough fight to control mosquitoes.

More than two dozen other mostly small-to-midsize cities throughout Brazil are using the app, which was developed by the Sao Paulo-based startup Colab.re.