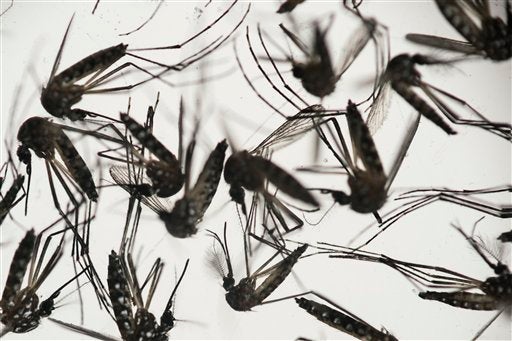 In this Jan. 27, 2016 file photo, samples of Aedes aegypti mosquitoes, responsible for transmitting dengue and Zika, sit in a petri dish at the Fiocruz Institute in Recife, Pernambuco state, Brazil. AP FILE PHOTO

WASHINGTON—US regulators tentatively agreed on Friday to permit a field test of genetically modified mosquitoes that are designed to help limit the spread of Zika virus and other infectious diseases.

In a document published on its website, the US Food and Drug Administration (FDA) said male mosquitoes called “OX513A” are unlikely to present risks to humans, animals or the environment.

However, the proposed test in the Florida Keys off the southeastern tip of the United States will not be given the final go-ahead until the FDA receives feedback from the public and other stakeholders, a process that will take months.

The aim is to eliminate wild mosquito populations that spread infectious diseases such as Zika, dengue, chikungunya and West Nile.

The genetically modified mosquitoes have been found to be effective in reducing the wild mosquito population in small tests carried out in Brazil and a few other countries.

The FDA fast-tracked the Oxitec application, with the pending arrival of warm weather that encourages the breeding of disease-spreading mosquitoes, an FDA official recently told Congress.

The continental US has not yet seen any cases of active Zika transmission but there are fears mosquitoes can spread the virus in parts of the US during the warmer months.

Authorities have also said mosquitoes are becoming resistant to insecticides, adding urgency to the task of finding a way to reduce their numbers.

READ: Getting rid of those pesky mosquitoes

The FDA’s decision was based heavily on an environmental impact assessment submitted by Oxitec, whose parent company is American biotech firm Intrexon.

The documents from the FDA and Oxitec said the genetically modified mosquitoes are unlikely to “escape” and form large wild populations because they are designed to die young.

Additionally, they should be safe for humans and other animals because the mosquitoes released in the test will be mostly male. Only female mosquitoes bite and feed on blood.

“FDA found that the probability that the release of OX513A male mosquitoes would result in toxic or allergenic effects in humans or other animals is negligible,” it said in the documents released Friday.

The mosquito-borne Zika virus is blamed for a spike in cases of the birth defect microcephaly in Brazil and other Latin American countries most affected by the outbreak.

Scientists have not confirmed the link between Zika and microcephaly, a serious and irreversible condition in which babies are born with abnormally small heads and deformed brains, but health authorities have advised pregnant women not to travel to areas affected by Zika.