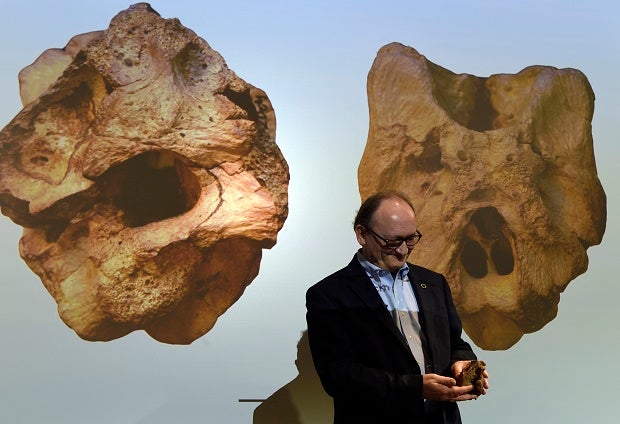 Hans-Dieter Sues, chair of the Department of Paleobiology at the Smithsonian’s National Museum of Natural History, holds a vertebra fossil from a new dinosaur, Timurlengia euotica, during a news conference in Washington, Monday, March 14, 2016. The image in the background is of the braincase of the Timurlengia euotica. The bones of a previously unknown member of the evolutionary branch that led to the huge tyrannosaurs were found Uzbekistan. This earlier dinosaur lived about 90 million years ago, south of what is now the Aral Sea. It looked roughly like a T. rex, but was only about 10 to 12 feet long and weighed only about 600 pounds at most, Sues said. AP

NEW YORK – How did evolution produce a monstrous killer like T. rex? A fossil find in Central Asia is giving scientists a glimpse of the process.

T. rex and other tyrannosaurs were huge, dominant predators, but they evolved from much smaller ancestors. The new discovery from Uzbekistan indicates that this supersizing happened quickly, and only after the appearance of some anatomical features that may have helped the monster tyrannosaurs hunt so effectively.

The finding was reported Monday by Hans-Dieter Sues of the Smithsonian’s National Museum of Natural History in Washington, Stephen Brusatte of the University of Edinburgh in Scotland, and others in a paper released by the Proceedings of the National Academy of Sciences.

They report finding bones of a previously unknown member of the evolutionary branch that led to the huge tyrannosaurs. This earlier dinosaur lived about 90 million years ago, south of what is now the Aral Sea. It looked roughly like a T. rex, but was only about 10 to 12 feet long and weighed only about 600 pounds at most, Sues said. T. rex grew about four times as long and weighed more than 20 times as much.

The discovery helps fill in a frustrating gap in the tyrannosaur fossil record. Before that gap, which began some 100 million years ago, the ancestral creatures were only about as big as a horse. Right after the gap, at about 80 million years ago, tyrannosaurs were multi-ton behemoths like T. rex. The new finding shows the forerunners were still relatively small even just 90 million years ago. So the size boom happened pretty quickly.

The inner ears of the newfound beast already had tyrannosaur features associated with good agility and hearing low-pitched sounds, which might have helped it detect prey or other animals at a distance. But the creature lacked the massive, bone-snapping teeth and large sinuses found in T. rex.

The creature was dubbed Timurlengia euotica (TEE’-mer-len-GEE’-uh yoo-OH-tih-kuh). The name honors the ancient Central Asian ruler Tamerlane and the large inner ears of the beast. The fossils include a braincase and bones from the neck, back, tail, feet and hands. The creature wasn’t a direct ancestor of T. rex, but it indicates what such ancestors looked like, Brusatte said.

The discovery helps scientists understand how “the (anatomical) parts got put together … on the path to T-rex-hood,” said Thomas R. Holtz, Jr. of the University of Maryland, who didn’t participate in the study. And suggests where to dig for more fossils to investigate the transition, he said.