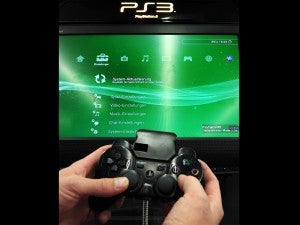 In this April 11, 2011 file photo, a man operates a Sony Playstation 3 console at an electronics shop in Mainz, Germany. Sony said Tuesday, Aug. 16, 2011, it is cutting the price of its PlayStation 3 gaming console by $50 in an attempt to drum up demand for the 5-year-old video game console. AP

SAN FRANCISCO—Sony Computer Entertainment America this week will begin rolling out exclusive new games as part of a strategy to lure players with fun titles only available on its PlayStation Network (PSN).

An “Only On PlayStation Network” program will kick off Tuesday and showcase videogames made by studios backed by a $20 million publishers fund set up by the Japanese entertainment titan.

“Our strategy from the very beginning, and even dating back to the PlayStation One, was to bring original brand content to our platform,” PSN senior director Susan Panico told AFP.

“Now, we are wrapping this all into a program,” she said.

PSN is an online venue where PlayStation 3 console users can obtain games software and play with or against one another.

Every Tuesday in October, the PlayStation online shop in North America will introduce exclusive new games that can be downloaded. The titles to debut this month include “inFAMOUS: Festival of Blood” and “PixleJunk Sidescroller.”

Introduction of the program is to be marked by discounts and promotions.

The move is part of a plan by Sony to win more PSN fans by providing enticing games unavailable at rivals such as Xbox Live.

“We are looking now to double-down on this strategy,” Panico said.