Microsoft sues US over secret demands for customer data 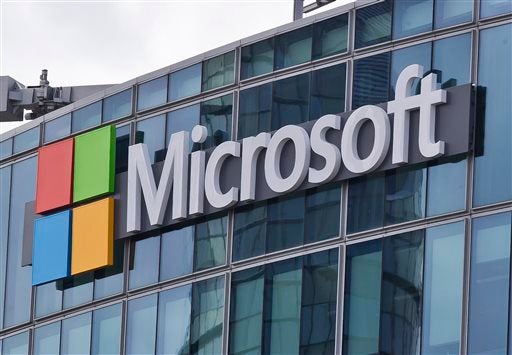 This Tuesday, April 12, 2016 file photo shows the Microsoft logo in Issy- les-Moulineaux, outside Paris, France. Microsoft opened a new front in the battle over digital privacy this week, suing the Justice Department on Thursday, April 14, 2016, over its use of court orders requiring the company to turn over customer files stored in its computer centers often without notifying the customer involved. AP

SAN FRANCISCO — Microsoft is suing the government over a federal law that lets authorities examine its users’ email or online files without their knowledge.

It’s the latest conflict between the tech industry and U.S. officials over individual privacy rights. Law enforcement officials want freedom to view a treasure trove of information — including emails, photos and financial records — that customers are storing on electronic gadgets and in so-called “cloud” computing centers.

Microsoft says the U.S. Justice Department is abusing the 1986 Electronic Communications Privacy Act, which allows authorities to obtain court orders requiring it to turn over customer files stored on its servers, while in some cases prohibiting the company from notifying the customer. Microsoft says those “non-disclosure” orders violate its constitutional right to free speech, as well as its customers’ protection against unreasonable searches.

A Justice Department spokeswoman said the government is reviewing the lawsuit, which was filed Thursday in Seattle federal court.

One former federal official was critical of Microsoft’s position, saying it could lead to warning “child molesters, domestic abusers, violent criminals and terrorists that they’re being investigated.”

The non-disclosure orders must be granted by a judge who has concluded that “notifying these individuals will have an adverse result, which could include messing up an investigation or even endangering the life or safety of individuals,” said Daniel “D.J.” Rosenthal, a former National Security Council and Justice Department attorney.

But Microsoft argues the law sets a vague standard for granting secrecy around digital searches. Authorities are required to disclose most search warrants for information stored in filing cabinets, safes or other physical locations, the company noted in its court filing.

“At the end of the day, when you are being investigated by the government, you should know about the investigation so you can prepare a defense,” said Mark Jaycox of the Electronic Frontier Foundation, a digital rights group.

Microsoft said government demands under the ECPA law are increasing in number for a variety of investigations, including white-collar cases.

“We appreciate that there are times when secrecy around a government warrant is needed,” Microsoft Corp. President Brad Smith said in a statement. “But based on the many secrecy orders we have received, we question whether these orders are grounded in specific facts that truly demand secrecy. To the contrary, it appears that the issuance of secrecy orders has become too routine.”

The Redmond, Washington-based company says authorities used the law to demand customer information more than 5,600 times in the last 18 months. In nearly half those cases, a court ordered the company to keep the demand secret.

Although some orders expired after a period of time, Microsoft said the gag orders were indefinite in about 1,750 cases, “meaning that Microsoft could forever be barred from telling the affected customer about the government’s intrusion.”

As more people store data online, Microsoft argued in its lawsuit that the government is exploiting that trend “as a means of expanding its power to conduct secret investigations.”

In an interview, Smith said the company decided to sue the Justice Department after a case where authorities threatened to hold Microsoft in contempt when it sought to contest a particular secrecy order.

“That caused us to step back and take a look at what was going on more broadly,” he said. “We were very disconcerted when we added up the large number of secrecy orders we’ve been receiving.”

While the lawsuit specifically challenges ECPA’s secrecy provision, Congress has been debating a number of reforms in response to criticism that it’s outdated in various ways.

The House Judiciary Committee this week approved a bill to amend the law so authorities would need a warrant to see email and other digital files that have been stored online for more than 180 days. Currently the law allows access with a subpoena, which can be obtained more easily by satisfying a weaker legal standard.

But a recent amendment to the bill would still allow non-disclosure orders lasting up to six months, which could potentially be extended. Microsoft’s Smith said he’s not optimistic that Congress will pass any reforms this year.

Microsoft rival Apple has been waging a high-profile legal battle over the FBI’s attempt to compel that company’s help in obtaining data stored on iPhones.

“It’s part of the same trend,” said Alex Abdo, a staff attorney at the American Civil Liberties Union. He said tech companies “have gotten the message loud and clear from the American public, that privacy matters.”

TOPICS: Apple, Email, Microsoft, Online
Read Next
All-flash technology for data analytics seen to boost businesses
EDITORS' PICK
Nesthy Petecio assured of Olympics bronze, ousts Colombian foe
After Olympic win, PAF promotes Hidilyn Diaz to staff sergeant
Tips for a cheerful life
Connect to PH’s fastest network with new Signature Plan Lite at only P599 per month
Trillanes: No Magdalo support if Robredo gives way to Lacson
Harnessing technology for quality education
MOST READ
Philippines to bring home multiple Olympic medals for first time since 1932
Isko for 2022? Manila mayor takes a swipe at Duterte in live broadcast
Lacson bares talks with Robredo ahead of 2022 polls
Why is Taiwan not called Taiwan at the Olympics?
Don't miss out on the latest news and information.