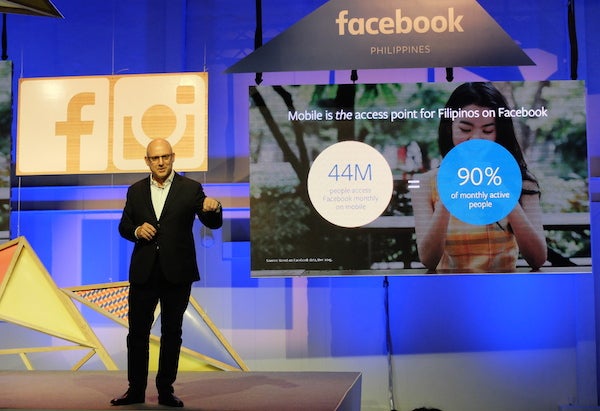 Facebook Asia-Pacific vice president Dan Neary speaks during the launch of the Philippine office of the social media giant.

Social network Facebook opened its Philippine office to focus on sales and advertising generation, basing the move on the number of users, the number of their mobile devices and the amount of time Filipinos spend on social media.

“The Philippines is among the most actively engaged Facebook users anywhere in the planet,” said Dan Neary, vice president and head of global marketing solutions team at Facebook Asia-Pacific. “Part of it is because they send more messages, more friends, but the huge portion of it is mobile.”

A study done by research firm TNS in August 2015 shows Filipinos spend 3.1 hours a day on mobile and 1.7 times more on Facebook and Instagram combined than on TV. Facebook data in 2015 reveals 24 million Filipinos access the social network on mobile every day. The staggering numbers of users are the audience that brands and companies are missing.

In the data by eMarketer, the Philippines posted 66.9 percent of mobile penetration as of 2016 with 40 percent using smartphones. In terms of advertising spend, eMarketer’s figures still put television on top with 64.9 percent, followed by OOH or out-of-home advertising at 8.7 percent, radio and print tied with 7.7 percent share each, and 0.4 for other. Digital and mobile advertising in the country is only 10 percent of the overall ad spend in 2016.

The discrepancy of the number of missed audience and ad spend is evident and shows that businesses are not maximizing the exposure they can get from advertising on Facebook or social media in general. If users are constantly glued on social media, checking their accounts every few minutes, there is no question of the chances for brands to be seen. However, strategic ad placements are done by agencies and this is where the Facebook Philippine office comes in.

Facebook has successful initial partnerships with brands, agencies and startups in the past. One example is Kalibrr, a cloud-based recruitment solutions provider, which used Facebook to raise brand awareness and reach employers and job hunters. Facebook said that in over eight months, Kalibrr posted 30 times increase in signups.

Apprehensions were high when Facebook announced years ago that it would be putting ads on the free social network. However, the statistics proved that it is indeed an effective advertising and marketing platform for many businesses regardless of size.

Again, in a research by TNS titled “PH on FB,” it says “95 percent of Filipinos on Facebook discover products and brands on the platform—of which 64 percent have made a purchase.”

Neary said that in the Philippines, more than 32 million Filipinos on Facebook are connected to a business page and 95 percent of them discover new products and 64 percent of that number have actually made a purchase.

Facebook, like other platforms, also created a “self-service” advertising tool where businesses can promote their pages. They can customize which posts to place, frequency and target audience and the cost is minimal and very much within a micro, small and medium entrepreneurs can afford.

But Facebook is looking beyond a business page’s promotion and will be going after real ads: boxed ads, side bars, and the like.

Southeast Asia is the fastest growing region for Facebook, according to the release, “and the Philippines plays a large role in driving this growth with Filipinos among the world’s heaviest users of social media.”

Potential agency, brands, and company partners were given a rundown on how their clients will be able to maximize the platform in reaching their target audience and get real-time data analysis of consumer behavior. Neary said there is no limit as to the target market or audience. The beauty of mobile or digital advertising is consumer behavior dictates the kind of ads they will see on the pages or strategically targeted.

Neary said even if it took the company a while to set up its offices in the country, the desire to connect the world has always been there, “… and nowhere is that more obvious than the Philippines.” RC