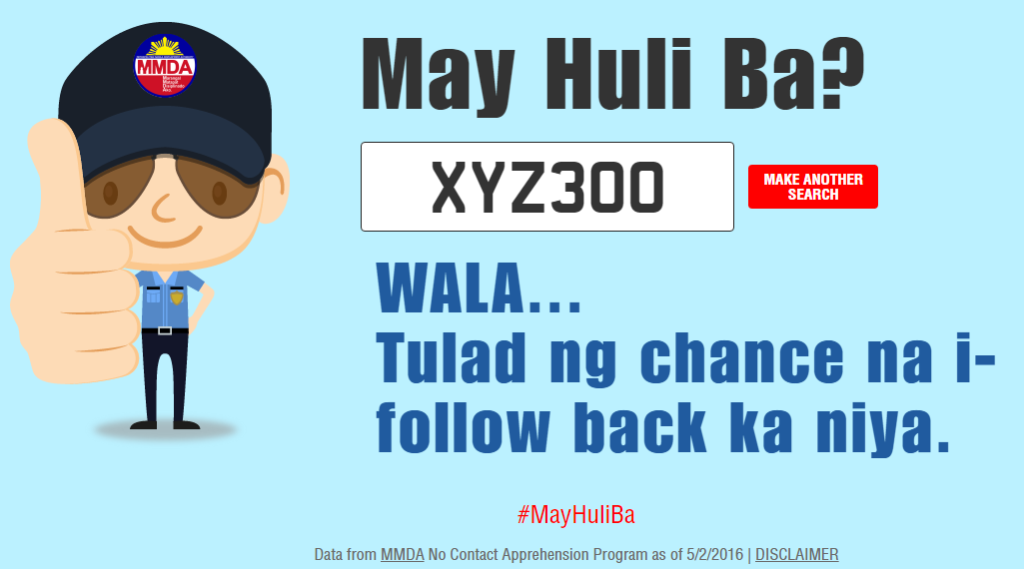 CATCHING traffic violators may be serious business but the Metropolitan Manila Development Authority (MMDA) sees no reason not to inject a little humor into the situation.

At the launching Thursday of its “MayHuliBa.com” website,   the MMDA said it would be dispensing “hugot” lines to motorists wanting to know if they were caught on one of the agency’s closed circuit television (CCTV) cameras violating a traffic regulation.

For drivers in the clear, here’s one of the hugot lines they might encounter on the website: “Wala, tulad ng karapatan mo na magselos dahil hindi naman kayo (None. Just like you have no right to be jealous because you’re not even a couple).”

Here’s another one: “Wala, as in zero, parang lovelife mo (None. As in zero, just like your lovelife).”

MMDA Chair Emerson Carlos said that the agency’s different teams compiled at least 100 hugot lines for the website which contains the names of motorists caught through its “no-contact” apprehension policy.

“It’s a way of helping the people know in advance whether they’ve committed a traffic violation or not,” he told reporters.

To access the database, motorists should type in their plate number (without spaces). Carlos said that errant drivers would see on the website the date, time and place where the violation was committed. Those with a clean record, on the other hand, will get a hugot line.

According to the MMDA chief, the violations are thoroughly reviewed by the agency’s no-contact apprehension team before these are uploaded on the website. He added that the process—from the review to the uploading—takes about a week.

Under its no-contact apprehension policy, the MMDA monitors violations committed by drivers through its network of around 650 CCTV cameras. Violators are then sent notices that they should respond to within seven days upon receipt. Protests should also be lodged within this period, otherwise, the motorist is considered to have admitted committing the violation.

Carlos, meanwhile, clarified that the seven-day period given to errant motorists to pay the corresponding fine would apply from the time they receive the notice.

No notice, no payment

“You are allowed to pay [the penalty] only if you have already received the actual summon and ticket. You cannot just go to one of our accredited banks and pay the penalty just because you have the screenshot of the website showing that you have committed a certain traffic violation,” he said.

Since the policy’s reimplementation on April 15, the MMDA as of Thursday said that it had recorded at least 5,000 traffic violations through the CCTV cameras installed in strategic locations throughout the metropolis like Edsa, C-5 and Commonwealth Avenue.

Carlos said that a total of 3,500 summonses have been sent out to violators with the agency yet to receive a single protest as of Thursday.