New gadget in Singapore sniffs out when toilets need cleaning 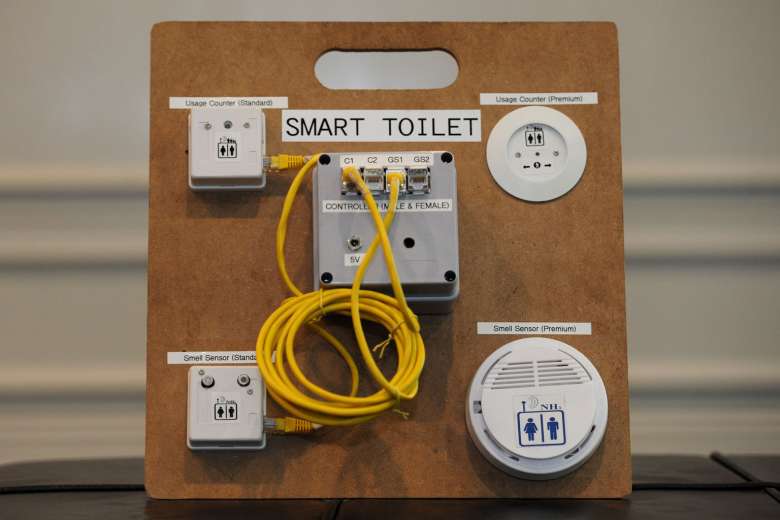 The Restroom Visitilizer System (above) tracks how heavily toilets are used, and has a sensor to measure the odor levels of things like ammonia and hydrogen sulphide. The information is then sent to a portal that can be accessed through laptops and smartphones. STRAIT TIMES PHOTO: AZMI ATHNI/ASIA NEWS NETWORK

SINGAPORE — Research engineers from the Agency for Science, Technology and Research (A*Star) have invented a toilet-monitoring system that can signal when toilets need to be cleaned.

The technology, called the Restroom Visitilizer System, has been on trial in more than 60 public toilets islandwide over the past two years, in places like Marina Bay Sands (MBS), the Singapore Zoo and River Safari.

The system, developed in 2013, has now been licensed to Convergent Smart Technologies, a local small and medium-sized enterprise.

Its director Cedric Hoon said the system has received good reviews from cleaning contractors. It costs about $1,700 to $2,000 to install a set of sensors for two toilets.

Dennis Quek, industry development manager at A*Star’s Institute for Infocomm Research, said public toilets are typically cleaned at regular intervals several times a day, regardless of how frequently they are used. Some cleaning firms also act on complaints, most of which are about smell, he added.

Hoon said cleaners have a roster for them to go and check the toilets up to six times a day, leading to manpower wastage.

Restrooms in shopping malls can be used by up to 300 people an hour; in food centers, the rate hovers at about 100 to 150 an hour.

Based on the toilets that tested the system, there was a 30 per cent improvement in manpower productivity, he said. “One cleaner can take care of more toilets – some which aren’t so heavily used – and he doesn’t have to walk around to physically check the toilets.”

Instead, on-demand alerts can be sent by SMS to cleaners if a particular toilet needs immediate attention.

To encourage more building owners to adopt the system, Convergent Smart Technologies signed an agreement this year with the Restroom Association (Singapore), or RAS.

An MBS spokesman said the integrated resort is constantly looking at ways to improve productivity with the use of technology.

It installed the sensor system in 10 toilets, and plans to install it in another 26 this year.

Adopting the technology “will allow our cleaning supervisors to monitor the restrooms in real time, so as to improve response time and prioritize duties,” she said.

“Another benefit is that it will enable us to plan and better manage our manual resources and consumables inventory,” she added.

A spokesman for the National University Hospital Kopitiam foodcourt, which installed the system in December last year–the first foodcourt in Singapore to do so–said the gadget is a convenient way of obtaining “relevant real-time information” on usage and odor levels in toilets.

“This is essential for the deployment of toilet cleaners, and it also helps monitor the amount of time they need to clean up, especially during periods of heavy usage,” he said.

“Furthermore, these statistics allow NUH to monitor our toilet usage and staff deployment. It also helps us to become more efficient, and enjoy cost savings on labor.”