Millennia after the earth, sea, and heavens were formed with Almighty hands, an Emoji Bible was created.

The Bible, the eternal library of Christian books and scriptures, has undergone a trendy makeover to suit the millennial generation.

Behold the Emoji Bible – it interprets all 66 books of the King James Version Bible with Unicode emoji icons and commonly-used internet slang and jargons. 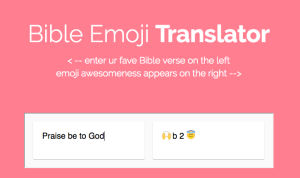 Citing reports by the Huffington Post and The Guardian, the anonymous creator of the innovative Emoji Bible, with the subtitle “Scripture 4 Millennials” used translation engine Lingo Jam to automatically and easefully translate all 66 books of the Bible. Also, an ‘in-translator’ website and a Twitter account were created to effectively spread the good news to online platforms.

“I’d tweet out the rough draft, get feedback from the Twitter community, then revise my program, ” the creator explained in an interview with Huffington Post.  It took him six months to incessantly substitute 80 emojis with 200 words from the Bible.

The e-book consists of 3,300 pages and is currently sold on iBooks in the United States for $2.99 (PhP 140). Gianna Francesca Catolico

TOPICS: Bible, e-book, Emoji, emojis, millenials
Read Next
American woman dubbed as ‘PrisonBae’ for viral mug shot
EDITORS' PICK
Garcia softens stance, meets IATF halfway on swab-upon-arrival policy
Want to help local farmers? Shop small and eat Real Food
ICC is everything but a court of ‘white people’
Manila is 78th most expensive city in the world for foreign workers
TeaM Energy pushes development programs to help in pandemic rebound
Piolo Pascual: The Ultimate Heartthrob continues to level up
MOST READ
Sharon Cuneta on living in the US: ‘Nagagawa ko lahat ng normal na bagay’
ICC is everything but a court of ‘white people’
Duterte-Duterte tandem possible but ‘winnability is another question’ — Binay
Mike Nieto asks fans: ‘No below the belt remarks’ toward South Korea
Don't miss out on the latest news and information.