The time for Flash to be flushed permanently is nigh 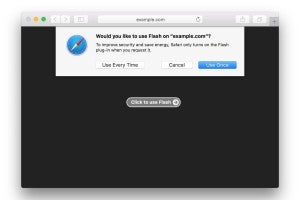 The update to Safari will actively block flash but still offer the option to activate it on a case-to-case basis. Image from Apple.

Apple is on a roll with its upgrades and this time it’s all about Safari. Starting iOS 10, Safari will begin actively blocking Flash by default.

Apple has long asked users to install Flash on their own when needed. This time the company is pretty much saying to forget Flash altogether by blocking it in Safari. However, until websites collectively move to HTML5, Safari will continue to provide an option to activate flash on a website-to-website basis.

Even Chrome has picked up the torch to outcast Flash and will be implementing the updates later this year, according to a report from The Verge.

Safari will also start blocking other browser plugins like Java and Silverlight. At this point even Adobe recognizes that Flash has reached the end of its road and has begun to advise developers to utilize other tools.

This move won’t be the proverbial last nail on Flash’s coffin but it should create enough of an incentive for websites to start working on their HTML5 versions or risk loosing traffic. Alfred Bayle