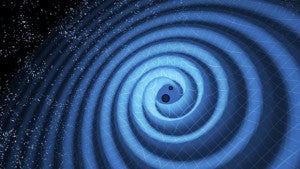 An artist rendition of two blackholes colliding and creating ‘ripples’ of gravity waves. Image from LIGO

Last December 2015, the Laser Interferometer Gravitational-Wave Observatory (LIGO) was able to detect gravity waves for the first time coming from two colliding black holes. And now, according to a report from VOX, the scientists at LIGO have done it again!

Blackholes, based on our current scientific knowledge, are the most destructive forces of nature in the known universe. Having two of these monstrosities of the cosmos collide is almost unimaginable. And now we finally have the technology to actually detect and study these phenomena through gravity waves. In layman’s terms, we can think of events like blackholes colliding as stones thrown into a calm pond and the ripples that these stones create are gravity waves.

So why are gravity waves such a big thing? Our current technology allows us to peer into deep space by detecting electromagnetic radiation such as x-rays, gamma rays, visible light, and more. However, there are heavenly bodies and phenomenon that do not emit radiation. Instead they emit gravity waves. For a person, it’s like being limited by what one sees and feeling what can’t be seen.

As a result, by tuning instruments to ‘listen’ for gravity waves, humankind can effectively extend how far we can see into space. Not only that, the detection of gravity waves also helps scientists expand their understanding Einstein’s theory of general relativity which was formed 100 years ago!

Greater understanding of how the universe around us work will also lead to the development of better technologies that could take our species deep into the stars and finally explore space like they do in popular science fiction books and movies.

Coincidentally, in the movie Interstellar, knowing how gravity affected time and space saved the human race and enabled interstellar travel. Now there’s something to think about. Alfred Bayle