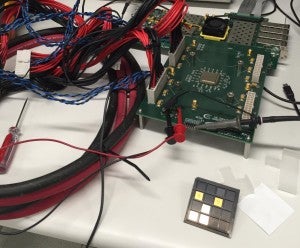 The KiloCore is the first 1000-core CPU to be produced although GPUs have been utilizing thousands of cores for graphics processing for quite some time already. Image University of California Davis

Having multiple cores in your laptop, desktop, or even smartphone isn’t something new. But when you reach a thousand cores in one processor, things get interesting.

According to a report on Engadget, University of California Davis has developed a 1000-core CPU. This KiloCore is said to come in handy with parallel tasks such as scientific data crunching, encryption, and video encoding. It has the capacity to shut down individual cores for efficiency while handling 115 billion instructions per second on 0.7W of power. To put into perspective, a single AA battery can power the KiloCore.

As a point of reference with regards to multi-core processing, graphics processing units (GPU) or graphics cards have already proven the efficiency of using several thousands of cores when it comes to video encoding.

While this may sound like groundbreaking stuff, mass production is still far down the line. The KiloCore was manufactured using a 32-nanometer process with assistance from IBM. The current standard for computer CPUs is 14-nanometer. Alfred Bayle