Stationary bike helps you get fit in virtual reality 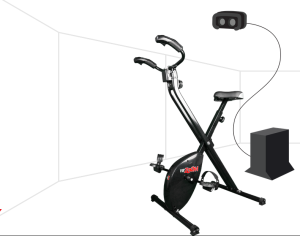 If dodging cars on your bike while inhaling toxic fumes in the city just to get some exercise is not your cup of tea, then virtual reality solves the problem for you.

The VirZoom is a stationary folding bike that comes equipped with sensors to work with various VR headsets including the HTC Vive and Oculus Rift. It also has buttons on the handle that let it work as a game controller.

According to Tech Crunch, the system is available online for $399 and comes bundled with six games, which put you in the shoes of a Pegasus, a dragonfly, inside a tank, race car, helicopter, and atop a horse.

The graphics are said to be rather rudimentary but users will still be able to lose themselves, thanks to the VR headset and constant movement made by peddling. Alfred Bayle