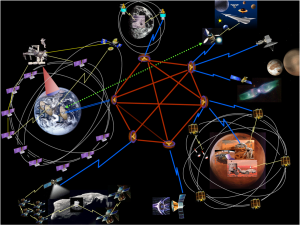 NASA is setting up the DTN to get internet access all across the solar system. Image NASA

NASA has laid down what can be considered as the foundation for a future solar system internet service. The system is referred to as Delay/Disruption Tolerant Networking (DTN).

The DTN will be providing an automatic and reliable “store and forward” data network for the International Space Station.

DTN stores partial bundles of data in nodes until the parts can be forwarded or retransmitted, which will then be rebounded at the final destination. This can be on Earth, a spacecraft in deep space or possibly to other humans who may one day live on other planets.

Currently, the DTN was added to the Telescience Resource Kit (TReK) to help researchers in transmitting and receiving data between operations centers and payloads about the station. It can also be used for transferring operational files.

NASA worked closely with Dr. Vinton G. Cerf, vice president and chief internet evangelist for Google as well as a distinguished visiting scientist at NASA’s Jet Propulsion Laboratory. Dr Cerf said, “Our experience with DTN on the space station leads to additional terrestrial applications especially for mobile communications in which connections may be erratic and discontinuous.”

This networking service is a representation of a decade of work for NASA’s Advanced Exploration Systems. It pioneers new approaches for rapidly developing prototype systems, demonstrating key abilities, and validating operational concepts for future human missions outside the Earth’s orbit.

Now all that’s left is to get people to Mars and then post a live tweet of their landing. Alfred Bayle