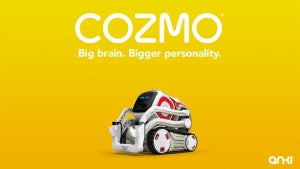 Cozmo comes with its own quirks and can also remember yours. Image Anki

There have been a number of robotic toys in the market, the most recent of which is the Star Wars-inspired BB8 droid. However, a company called Anki attempts to up the ante with the quirky mini-bot Cozmo.

Cozmo is the the result of combining artificial intelligence, computer vision technology, and robotic movements by former Pixar animators. This little robot comes equipped with dozens of expressions that can be seen on its small display as well as its movements. It also communicates through a collection of beeps and other bot-like noises. Needless to say, when Cozmo gets annoyed, its owner will know in no uncertain terms, reports Engadget.

Artificial intelligence for Cozmo comes in the way that it recognizes and remembers faces, as well as the quirks of the people he often interacts with, just like a dog that remembers that when its owner raises a hand, it means it’s feeding time.

The batteries on Cozmo only lasts for about two hours but the little bot is aware enough to recharge itself on the roll-on charger. Charging typically takes only 10 minutes.

Anki wanted to emphasize the imperfections of Cozmo to make it more relatable and endearing to its human owners. In many ways Cozmo is like Wall-E from the movie of the same name.

Cozmo can be ordered at Anki’s website for $180 and shipping will begin in October. Anki, however, is offering a pre-order discount for early adopters. Alfred Bayle