WATCH: Turn your iPhone 6s into iPhone 7 in this wacky video

Though iPhone 7 is not yet out in the stores, anyone who is desperate to have one as early as now can tune into this weird two-minute YouTube video instructing users how to turn their iPhone 6s into an iPhone 7.

In the viral video uploaded by Peripatetic Pandas on Tuesday, it demonstrates 10 “carefree” steps on how to engineer an iPhone 7 without knocking on Apple’s headquarters. First, the man in the video eliminated the headphone jack of the iPhone 6s and then drilled two holes for dual speakers. The next outrageous step he did was to get a spare iPhone 6 and snipped its camera and glued it onto the other iPhone 6s prototype. 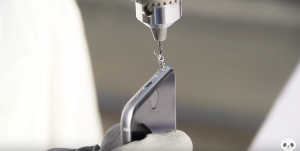 Then he firmly placed masking tape onto the phone’s body and swooshed deep-blue spray paint. It is whispered among tech news sites that the next flagship product of Apple would wear its deep bluish coat.

After the spray painting procedure, he removed the masking tape and voila, the “brand new” iPhone 7. To social media’s “bewilderment,” plenty of YouTube users glorified Peripatetic Pandas for his creativity.

Here is their newest video: