After several hacking issues involving the accounts of company CEOs, one of which belonged to Mark Zuckerberg himself, another hacker has successfully infiltrated the Twitter account of Oculus CEO Brendan Iribe.

The hacker even had the audacity to announce a new CEO for the company using Iribe’s account and mentioned another Twitter account with the name @Lid, Tech Crunch reported. 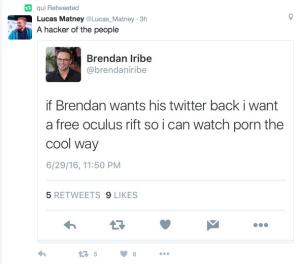 At the time of writing, the latest tweet made by the hacker was an attempt to “negotiate,” promising to return access to Iribe in exchange for an Oculus Rift VR headset. No word yet as to how this issue will be resolved or if Oculus is willing to provide this hacker with his desired VR headset to address his pornographic needs.  Alfred Bayle