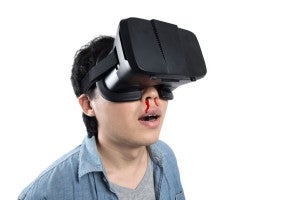 One of the displays in the event featured a very unassuming cardboard box with a hole in the middle. When a hand is pushed into the hole, a system tracks its movements and responds by blowing air into the right places to simulate the feel of a female breast, reports The Next Web.

The festival had to be prematurely terminated due to the enormous mass of attendees and concerns over a possible riot due to overcrowding. Alfred Bayle