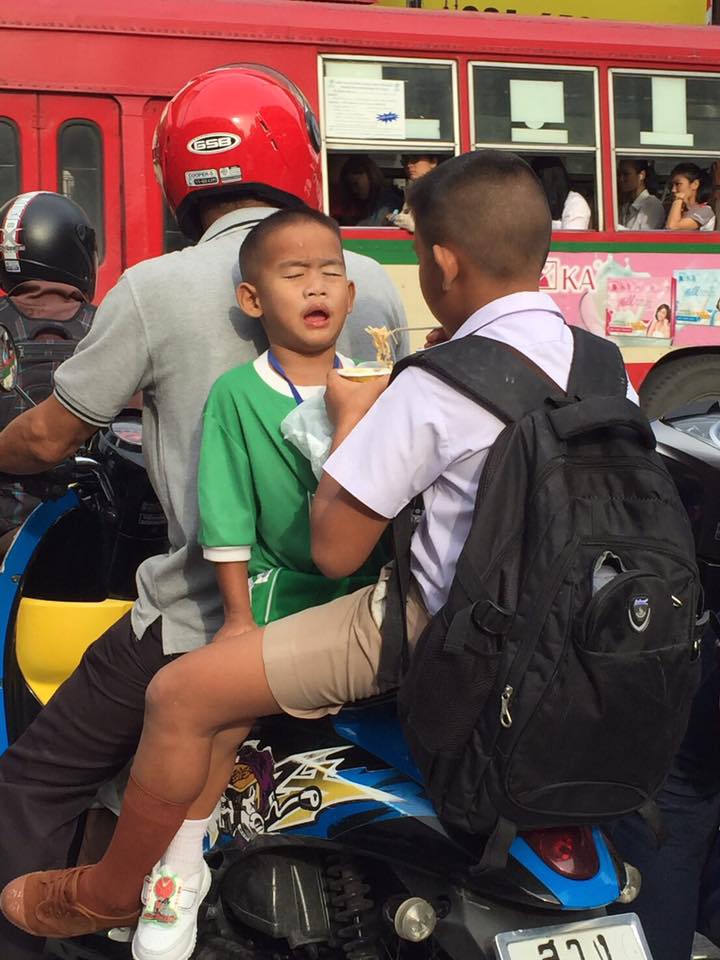 A young Thai student is feeding a boy, who could be his kid brother, instant noodles on a motorcycle during rush hour in Bangkok. #NationPhoto by Sukol Kerdnaimongkol

THAILAND—A photo of who looked like a grade-school student feeding his kid brother instant noodles while riding at the back of a motorcycle during rush hour in Bangkok has gone viral on social media.

The photo was taken by The Nation’s photographer Sukol Kerdnaimongkol. He captured the picture while he was stuck at a red-light traffic on the mouth of Soi Sukhumvit 77.

When The Nation posted the photo on its Facebook page on Wednesday (July 6 at 3:24pm), The Nation Bangkok, for about one hour, it was shared 75 times. And it won more than 200 likes.

A Facebook user named Joke Jessada showed sympathy to the kids. Writing at The Nation’s Facebook page, the comment read: “What ’s the parent thinking during the morning rush? Why do people have to live like this?”

Andrew Tait was more cautious, saying “They could (have) at least [worn] their helmets.”

Anchalee Tienkachart wrote that it was very dangerous. She said she felt sympathetic to Bangkokians and asked the authority to be more serious with solving traffic problem in Bangkok.

Roger James said, “Would be good if they had helmets on like the rider.”

Tim Noppawan said the parents need to be held responsible for risking safety of their children. TVJ