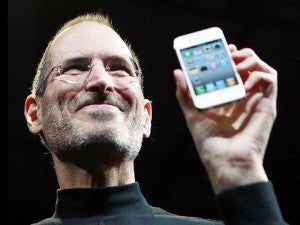 JOBS REMEMBERED. Steve Jobs holds the new iPhone 4 during the Apple Worldwide Developers Conference in San Francisco on June 2010 . Prior to his death, Jobs resigned as CEO of Apple. No reason was given although speculation swirled that he gave up his post due to failing health. AP FILE PHOTO

SAN FRANCISCO – Apple’s Steve Jobs has died from cancer at the age of 56, a premature end for a visionary who revolutionized modern culture and changed forever the world’s relationship to technology through inventions such as the iPad and iPhone.

“We are deeply saddened to announce that Steve Jobs passed away today,” the California-based gadget-maker’s board of directors said in a statement released after his death on Wednesday, surrounded by his family.

“Steve’s brilliance, passion and energy were the source of countless innovations that enrich and improve all of our lives. The world is immeasurably better because of Steve.”

Tributes flowed in from around the world for Jobs, while Apple fans flooded social networking sites to voice their sorrow at the passing of the man who helped put mini computers in the shape of phones in millions of pockets.

Ordinary people, many of whom learned of his death on their iPhones and iPads, swamped Twitter using the trending hashtag #thankyousteve to pay tribute to Jobs “for all you have done for this generation,” as one person tweeted.

Another called on Jobs to make an “iHeaven to connect us with God.”

Jobs was just 21 when he founded Apple Computer in 1976 with his 26-year-old friend Steve Wozniak in his family garage.

From such humble beginnings the company, with its ubiquitous trademark of an apple with a bite taken out of it, grew to eventually become one of the world’s most valuable firms.

US President Barack Obama paid tribute to one of America’s “greatest innovators.”

“He transformed our lives, redefined entire industries, and achieved one of the rarest feats in human history: he changed the way each of us sees the world,” Obama said in a statement.

Wozniak told CNN he was “dumfounded” by news of the death of his former partner, comparing it to the untimely and traumatic loss of John F. Kennedy and Martin Luther King in the 1960s, and saying it had left “a big hole.” 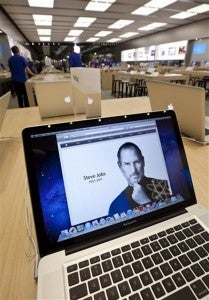 The image of Apple's founder and former CEO, Steve Jobs, is displayed on one of the company's MacBook Pro laptop computers at the Apple Store in Little Rock, Ark., Wednesday, Oct. 5, 2011. Jobs, the Apple founder and former CEO who invented and masterfully marketed ever-sleeker gadgets that transformed everyday technology, from the personal computer to the iPod and iPhone, died Wednesday. He was 56. Apple announced his death without giving a specific cause. He died peacefully, according to a statement from family members who said they were present. AP

“I’m a little bit, like, awestruck, just dumbfounded, and I can’t put my mind into gear, I can’t do things,” a distressed Wozniak, now 61, said.

“Here is a guy that created tools that everyone in the world – billions of people – just love, and feel happy and good about.”

Microsoft boss Bill Gates along with other titans of the high-tech industry agreed, with some people hailing Jobs as a modern-day Thomas Edison, who invented the light bulb.

“The world rarely sees someone who has had the profound impact Steve has had, the effects of which will be felt for many generations to come,” Gates said in a statement.

The two men were rivals in the race to dominate the market at the start of the personal computer era.

But while personal computers powered by Microsoft software ruled work places, Jobs envisioned people-friendly machines with mouse controllers and icons to click on to activate programs or open files.

Tim Cook – who had been handling Apple’s day-to-day operations since Jobs went on medical leave in January, and was made CEO in August after his resignation – led the praise for the Silicon Valley legend.

“Steve leaves behind a company that only he could have built, and his spirit will forever be the foundation of Apple,” he said in a statement.

Apple turned its home page into a tribute to Jobs, posting a large black-and-white photo of the bearded high-tech maestro in his trademark black turtleneck and small round glasses. The only caption: “Steve Jobs, 1955-2011.”

Jobs’s family also issued a statement, saying he had lost his long battle with pancreatic cancer surrounded by his relatives.

“In his public life, Steve was known as a visionary; in his private life, he cherished his family,” it said.

Born on Feb. 24, 1955 in San Francisco to a single mother and adopted by a couple in nearby Mountain View at barely a week old, Jobs grew up among the orchards that would one day become the technology hub known as Silicon Valley.

Under Jobs, Apple introduced its first computers and then the Macintosh, which became wildly popular in the 1980s.

He was elevated to idol status by ranks of Macintosh computer devotees, but left Apple in 1985 after an internal power struggle and started NeXT Computer company specializing in sophisticated workstations for businesses.

He co-founded Academy-Award-winning Pixar in 1986 from a former computer graphics unit he bought from movie industry titan George Lucas.

Apple’s luster faded after Jobs left the company, but they reconciled in 1996 with Apple buying NeXT for $429 million and Jobs ascending once again to the Apple throne.

Apple went from strength to strength as Jobs revamped the Macintosh line, launching a “post-PC era” in which personal computers give way to smart mobile gadgets – the iPod, iPhone and the iPad, as well as the popular iTunes site.

His passing will raise doubts over whether the Cupertino, California-based company can continue its dominance in the hugely competitive technology sector.

His death comes only a day after Cook presided over the launch of the new iPhone 4S in a move that failed to dazzle investors.

Jobs is survived by his wife Laurene, with whom he had three children. He also had a daughter with a woman he dated prior to marrying.

TOPICS: Apple, Computing and Information and Technology, Death Notice, Obit, Steve Jobs, Telecommunications
Read Next
Steve Jobs, from dropout to Apple visionary
EDITORS' PICK
Trillanes: No Magdalo support if Robredo gives way to Lacson
Nesthy Petecio assured of Olympics bronze, ousts Colombian foe
Tips for a cheerful life
After Olympic win, PAF promotes Hidilyn Diaz to staff sergeant
Connect to PH’s fastest network with new Signature Plan Lite at only P599 per month
Harnessing technology for quality education
MOST READ
Philippines to bring home multiple Olympic medals for first time since 1932
Isko for 2022? Manila mayor takes a swipe at Duterte in live broadcast
Lacson bares talks with Robredo ahead of 2022 polls
Why is Taiwan not called Taiwan at the Olympics?
Don't miss out on the latest news and information.