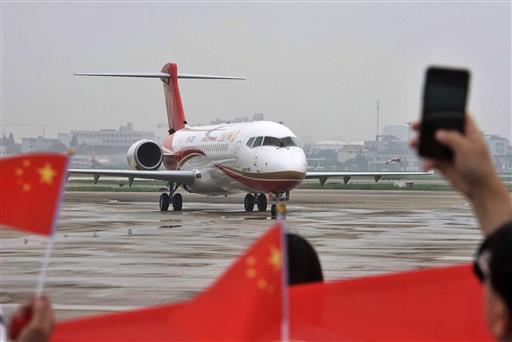 In this June 28, 2016, file photo, people wave Chinese flags and take photos as a Chengdu Airlines ARJ21-700 regional jet is taxied after landing at the Hongqiao Airport in Shanghai. AP

HONG KONG — China’s state-owned aircraft maker has signed a deal to sell up to 60 of its new regional jets to a leasing company in a deal worth up to $2.3 billion.

In a joint statement late Monday, Commercial Aircraft Corp. of China Ltd., or COMAC, said the agreement signed with China Aircraft Leasing Group, a Hong Kong-listed company, includes a confirmed order for 30 ARJ21-700 jets and an option to buy 30 more.

The companies said the aircraft will be leased to an unidentified Indonesian airline that one of China Aircraft Leasing’s shareholders, Friedmann Pacific Asset Management Ltd., plans to invest in.

The ARJ21-700 is part of efforts by China, one of the world’s biggest and fastest-growing air travel markets, to develop a homegrown aviation industry. It’s a rival to aircraft made by Bombardier Inc. of Canada and Brazil’s Embraer SA.

The ARJ21 took its maiden commercial flight last month, which came a decade behind schedule because of technical problems. The deal, which was signed at Britain’s Farnborough International Airshow, is the biggest single commercial order for the jet since its debut, the companies said.

The aircraft will be delivered over the next five years and the deal’s value is based on the plane’s list price. Hong Kong-based Friedmann Pacific, an investment firm specializing in aviation, plans to operate the Indonesian airline solely using ARJ21 planes.

In 2012, China Aircraft Leasing placed an order for another jet COMAC is developing, the C919, a long-range airliner aimed at competing with planes from Boeing and Airbus. The C919, which has also been beset by delays, is due to enter service in 2019. TVJ