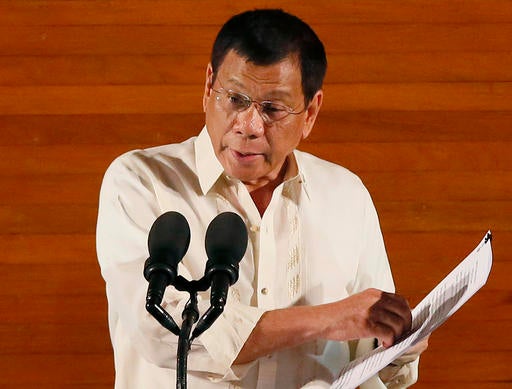 With a country known for providing notoriously slow yet expensive internet connection, President Rodrigo Duterte on Monday announced his plans to have better internet for Filipinos.

In his first State of the Nation Address (SONA), Duterte said that he directed the newly-created Department of Information and Communications Technology to craft a National Broadband Plan (NBP) to address the country’s internet problems.

“I also directed the newly-created Department of Information and Communications Technology to develop a National Broadband Plan to accelerate the deployment of fiber optic cables and wireless technologies to improve internet speed,” Duterte said.

He also said that he would put up hotspots where Wi-Fi can be accessed for free.

“Wi-Fi access shall be provided at no charge in selected public places,” the President said.

The President earlier asked the two main telecommunication companies to shape up or else face new competition.

“You improve the service or I will open the Philippines. All can come in,” he said last May.

The Philippines ranked 176th out of 202 countries in terms of average download speed, according to a study conducted by internet metrics provider Ookla: posting an average household download speed of 3.64 Mbps.

According to Ookla, the Philippines has the second-slowest internet connection in Asia, beating strife-torn Afghanistan. IDL/rga