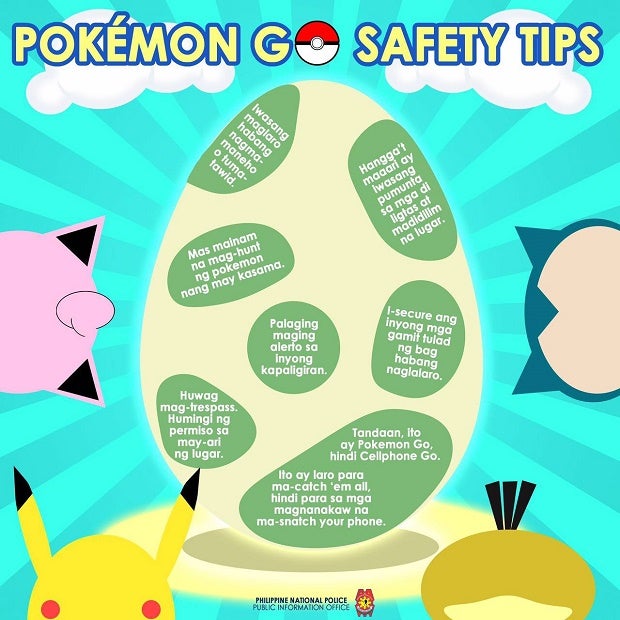 Don’t be an easy target for snatchers, the Philippine National Police (PNP) advised the users of the mobile game Pokémon Go.

The PNP has issued safety tips for players of Pokémon Go, now considered the most popular smartphone application in many countries. Here are PNP’s tips:

(Remember, it’s Pokémon Go, not Cellphone Go. It’s a game for you to catch ‘em all, not for for thieves to snatch your phone.)

In an interview on Thursday, PNP’s Police Community Relations Group (PCRG) director Senior Supt. Gilbert Cruz urged the public not to let themselves become “objects of robbery and snatching” while playing the interactive game.

(There comes an opportunity for crime to occur if the person’s awareness is not there. If the focus is on the cellphone, you may be more prone to becoming a victim of robbery or theft.) 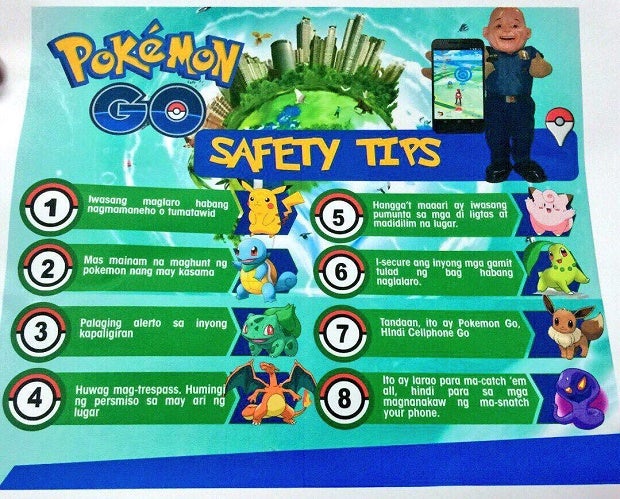 Although the PNP has not recorded any incidents yet related to Pokémon Go, reports said that players in other countries have been getting into accidents while playing the game.

A local official in Zamboanga has issued a similar advisory for Pokémon Go players in the city. Meanwhile, a judge in Cebu warned players that they would land in jail if they would hunt down Pokémon characters insider her chamber.

(It’s okay to play, but let’s do it in the right place. If we feel that the place is safe, like big parks that are well-lit, that’s fine. But if you are unfamiliar with the place and then you would suddenly go there because you see a Pokémon there, think twice because your desire to catch that Pokémon might get you hurt, robbed, or dead.) CDG