Actor who played Red One in ‘Bioman’ battling cancer 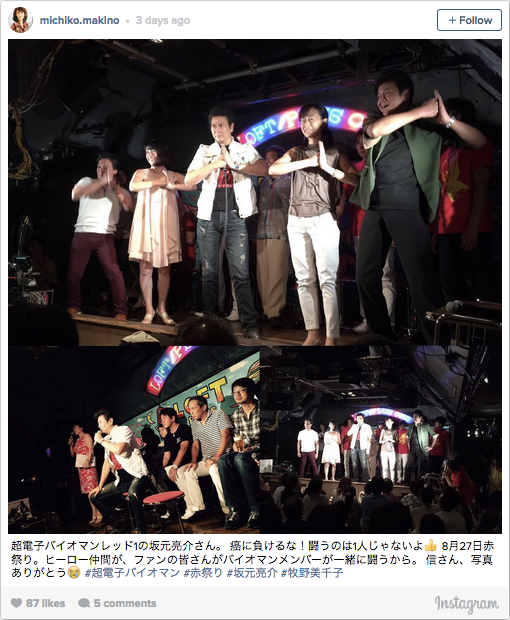 Ryosuke Sakamoto is joined on stage by his team as they strike the Bioman transformation pose and sing the intro for the series with fans and fellow actors alike.  Image Instagram michiko.makino

“Choudenshi Bioman,” or simply “Bioman,” is one of the early Super Sentai TV shows aired on Philippine television, and has quite a following within the country and, of course, Japan. In the recent Akamatsuri (Red Festival) the actor who played Red One, Ryosuke Sakamoto, announced that he had been diagnosed with esophageal cancer.

Akamatsuri is a yearly event that brings together actors and actresses of past Super Sentai shows. It is because of the camaraderie that Sakamoto feels he will be able to pull strength from his fellow Sentai actors and fans as he fights to overcome his current ordeal, reports Tokusatsu Network.

Unknown to Sakamoto, the remaining members of the Bioman cast had coordinated and gathered especially to encourage him as he will be undergoing surgery in September.

Michiko Makino, who played Pink Five, lovingly recalled in her blog that after showering Sakamoto with support, he and the entire team broke into tears. The actors also performed their signature transformation poses on stage and sang the opening song of Bioman with everyone in the event including actors from other Super Sentai series such as Dlashman and Maskman.

Super Sentai fans who wish to send their support may do so on social media with the hastag #GoRedOne.  Alfred Bayle