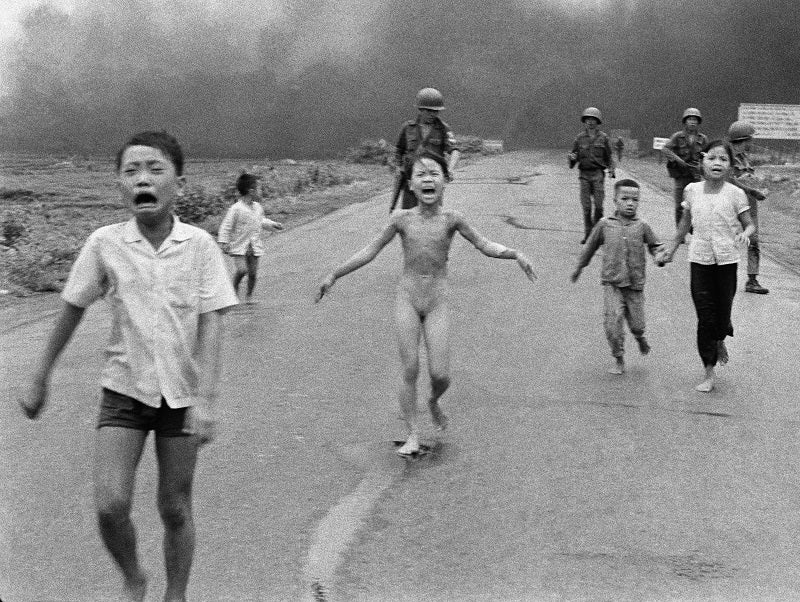 SAN FRANCISCO, United States – Facebook backtracked Friday on a decision to censor an iconic Vietnam War photo of a naked girl escaping a napalm bombing, after its block on the historic image sparked outrage.

The online giant stopped short of apologizing, saying the image had been flagged for violating standards regarding inappropriate posts at the world’s leading social network.

“An image of a naked child would normally be presumed to violate our Community Standards, and in some countries might even qualify as child pornography,” Facebook said in a statement.

“In this case, we recognize the history and global importance of this image in documenting a particular moment in time.”

Taken by photographer Nick Ut Cong Huynh for the Associated Press, the 1972 picture of a naked Vietnamese girl running from a napalm attack is considered one of the war’s defining images. It was honored with the Pulitzer Prize.

After Facebook reversed position on the image, Solberg told the BBC she was a “happy prime minister.”

Solberg refused to back down, re-posting the photo on her Facebook page, along with several other iconic pictures with sections blacked out, in an attempt to illustrate the absurdity of censoring historic images.

“What Facebook is doing by deleting photos like this, as good as their intentions are, is to edit our common history,” she wrote in a post.

Solberg had shared the picture at Facebook in the name of freedom of expression amid a brewing debate in Norway.

The row began several weeks ago after Norwegian author Tom Egeland published a post about war photos, illustrated by the picture. Facebook promptly deleted it.

Norwegians had risen to his defense by publishing the photo, posts that Facebook also deleted in line with its rules barring nudity.

The affair took on such proportions that the Norwegian Press Federation asked the country’s powerful pension fund, the world’s largest sovereign wealth fund, to examine whether the censorship practice was in line with its ethical criteria for investments.

Traditional media also voiced concern about the moves by Facebook, which has become a key source of news and information for hundreds of millions of people.

On Friday, Norway’s biggest daily Aftenposten dedicated the front page of its print edition to the photo, and published a two-page open letter to Facebook founder Mark Zuckerberg.

Facebook said it reversed course after the outcry from its members and that is was examining how its standards were applied in the situation.

“Because of its status as an iconic image of historical importance, the value of permitting sharing outweighs the value of protecting the community by removal,” California-based Facebook said of the decision to reinstate posts of the image.

Facebook said it was also modifying its review mechanisms to prevent the image from being removed in future, but that process could take some time.

“The photo should be avai lable for sharing in the coming days,” Facebook said.

“We will be engaging with publishers and other members of our global community on these important questions going forward.”

This is not the first time Facebook has been accused of a lack of sensitivity in how it enforces its rules on appropriate content. The company has in the past blocked seminal artworks because they featured nudity.

Facebook is due to go on trial in France, where a schoolteacher accused it of censorship for blocking his account after he posted a photo of a painting by 19th-century master Gustave Courbet called “L’Origine du monde” (The Origin of the World) that depicts a woman’s vagina.

And earlier this year, a Danish lawmaker also complained that Facebook had removed her picture of the Copenhagen statue of the Little Mermaid because of its nudity rules.

Reporters Without Borders (RSF) depicted Facebook’s censorship of the Vietnam War photo as a grave violation of freedom of information.

“The ‘decency’ rules used by this social network are so restrictive that they trample on the freedom to inform,” RSF secretary-general Christophe Deloire said in a statement.

“We call on Facebook to add respect for the journalistic values of photos to these rules, and to ensure that their rules are never more severe than national legislations.”

Lasers may ease pain for ‘napalm girl’ in AP photograph

Woman in AP “napalm photo” to honor her saviors

Poe on Cayetano’s ‘sipsip’ remark: You can’t please everyone