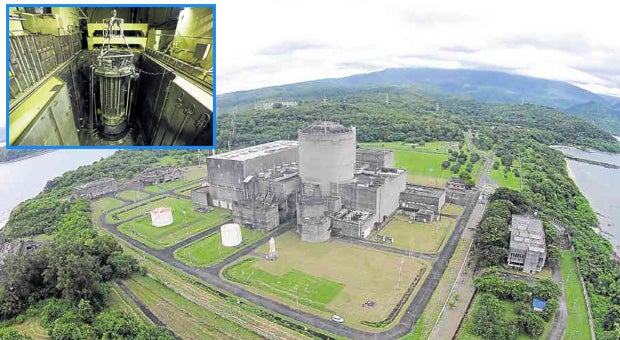 The mothballed Bataan Nuclear Power Plant (shown in this drone shot) in Morong, Bataan, has yet to produce a single watt of energy. Inset photo shows the containment building of the plant, which contains the reactor. REM ZAMORA and LYN RILLON

An environmental activist group on Wednesday called on President Rodrigo Duterte to stop proposals to revive the mothballed Bataan Nuclear Power Plant, which it called a “legacy” of martial law declared exactly 44 years ago.

Kalikasan People’s Network for the Environment said the 620-megawatt nuclear power plant in Morong was one of the “persisting legacies of pollutive and corrupt big projects that characterized martial rule.”

“The stubborn proposals to revive the BNPP by big business and their mouthpieces in government should be permanently laid to rest along with the rest of the dark history of Martial Law rule. The proposal has been repeatedly defeated over the past two administrations because it has been proven time and again as an ecological time bomb and money sinkhole for corruption,” Zeph Repollo, energy campaigner of Kalikasan PNE, said in a statement.

The late dictator Ferdinand Marcos decided to build the $2-billion plant at the height of the 1973 oil crisis. It was completed and ready for operation in 1984, but never opened after a decade of construction due to safety concerns.

Former President Corazon Aquino mothballed the nuke plant in 1986 in the wake of a nuclear fore at the Chernobyl power plant in Russia.

Energy Secretary Alfonso Cusi said the administration is mulling to revive the plant as a solution to energy shortage and high cost of electricity, with the demand and reserve requirement expected to double at 30,189 megawatts by 2030. He noted that nuclear power was cheaper to producer and has greater longevity than other depletable sources like natural gas and coal.

Repollo said the group would block any attempt to revive the nuke plant in Congress, urging President Duterte to channel government resources into finding “safer, more reliable, and environment-friendly” sources of energy “that will truly benefit the Filipino people.”

A Senate hearing was told that Manila spends P27 million a year for the nuke plant’s upkeep.

“The reason these attempts to revive the BNPP was vain was because the project itself is defective, almost obsolete and is proven unsafe to operate. There are numerous and significant arguments raised with regards to geologic hazards, infrastructure integrity, and nuclear waste storage and disposal. Its operation also poses great risks to the health and lives of the people and the environment,” Repollo said.

“The BNPP was never an assurance of cheap electricity for the people and energy independence for the country, as it will be monopolized by private interests, reliant on the importation of nuclear fuel, and impose a bigger burden to Filipino taxpayers,” he added.