Waze sets out to eliminate ‘tunnel blindness’ on mobile maps 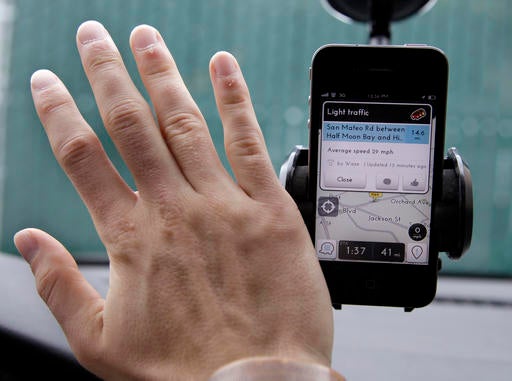 In this March 15, 2012, file photo, Ben Gleitzman waves his hand over a traffic and navigation app called Waze on his Apple iPhone in a Menlo Park, Calif., parking lot during a demonstration showing traffic conditions on the display. AP

Waze plans to keep drivers connected in those GPS-less situations by installing low-cost, battery-powered beacons that will transmit to smartphones and tablets in tunnels that the company has it its database, covering about 7,500 miles (12,000 kilometers) around the world. The beacons can maintain map connections, as long as the drivers turn on their Bluetooth signal.

The beacons will be turned on Wednesday in two Pittsburgh tunnels, Fort Pitt and Liberty, and another in Israel, where Waze was founded before Google bought it in 2013 for $969 million.

Waze is trying to persuade all tunnel operators, mostly government agencies, to buy and install the beacons that it designed to address the problem. It costs about $1,200 for the 42 beacons required to provide coverage for every mile (1.6 kilometers) within a tunnel. Each beacon is guaranteed under warranty for four years.

Plans already are being drawn up to install the Waze beacons in tunnels in Rio de Janeiro and Paris, too. Waze isn’t projecting how long it will take to realize its goal of blanketing all tunnels with the beacons.

The transmissions from the beacons will be unencrypted so other digital map services, including Google’s and Apple’s, can also connect to them through Bluetooth when there isn’t a GPS signal.

Waze’s solution for tunnel blindness was developed by one of its systems operations engineers, Gil Disatnik. He got the idea after losing his GPS signal in 2014 while driving through a Boston tunnel and missing the turn he needed to take to get to the airport.

After working on the tunnel beacons, Disatnik also got a new nickname: “Waze Mole.” TVJ