A year of Alphabet: Great for Google, less so for moonshots 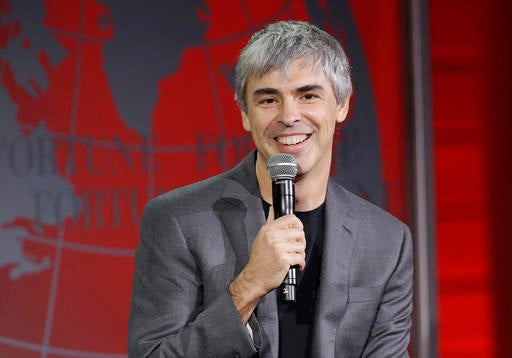 In this Nov. 2, 2015, file photo, Alphabet CEO Larry Page speaks at the Fortune Global Forum in San Francisco. Google has been thriving since adopting Alphabet Inc. as its corporate parent in 2015, underscoring how much the company still depends on digital advertising despite spending heavily on quirky projects in search of another technological jackpot. AP

SAN FRANCISCO — Reorganizing itself under the umbrella company Alphabet has done wonders for Google — but less so for a grab bag of eclectic projects ranging from robotic cars to internet-beaming balloons, which are suffering costly growing pains.

A year after Alphabet took shape, Google’s revenue growth has accelerated — an unusual development for a company of its size. That success, however, also underscores Alphabet’s dependence on the fickle business of placing digital ads in core Google products like search, Gmail and YouTube video. As a result, it remains vulnerable to swings in marketing budgets and stiffening competition from another equally ambitious rival, Facebook.

Alphabet was supposed to speed the process of turning offshoot businesses into new technological jackpots. CEO Larry Page predicted that separating these smaller “moonshots” from the massive search-and-advertising business would spur innovation by fostering a more entrepreneurial atmosphere.

Until Page and fellow Google co-founder Sergey Brin created Alphabet (which turns 1 on Sunday), investors complained that Google was spending too much on high-risk efforts. New Chief Financial Officer Ruth Porat, who joined Google in mid-2015, responded by reining in expenses to keep them more in line with revenue growth.

A few months later, Page announced the plan to draw a dividing line between Google and the far-flung forays Alphabet now refers to as “Other Bets.” The mishmash includes smart-thermostat maker Nest; the Fiber project, a high-speed internet service; and X lab, where the company is building robotic cars and designing the stratospheric balloons designed to beam internet service to remote areas.

Other “Other Bets” include the biotech firm Verily and medical-research firm Calico, which has been studying ways to stop aging. Alphabet also runs funds investing in startups and mid-sized companies.

Page argued that fencing off Other Bets would make Google “even better through greater focus.”

That part of Page’s vision appears to be panning out. After subtracting ad commissions, Alphabet’s second-quarter revenue jumped 22 percent from the previous year to $17.5 billion. It was the best performance in four years, adjusted for changes in currency exchange rates, says RBC analyst Mark Mahaney. Alphabet shares rose 25 percent over the past year, easily outpacing major market indexes.

Alphabet Inc. declined to comment on its first-year performance. But Sundar Pichai, who became Google’s CEO in the restructuring, told investors in July, “There is an amazing energy right now.”

Among other things, Google has been making strides in the still-nascent field of artificial intelligence, hoping to create more convenient services that attract even more eyeballs for its advertisers.

But the demand for financial discipline and accountability appears to have taken a toll on Other Bets, which lose billions of dollars a year. Key leaders have defected from Alphabet’s high-profile self-driving car project and its Nest line of internet-connected devices. Alphabet also has scaled back plans to expand its Fiber service to dozens of U.S. cities.

Creating a holding company also was supposed to make it easier to diversify through major acquisitions. But Alphabet’s biggest deal so far has been the $625 million purchase of a business software maker, Apigee Corp., which had annual revenue of just $92 million.

Alphabet could make a much bigger splash if buys Twitter, as recent reports say it is considering. Twitter would give Alphabet a popular publishing outlet to monitor trends, mine data and sell even more ads. Alphabet declined to discuss whether it’s mulling a bid, which would be expensive; Twitter might fetch between $20 and $30 billion, despite its problems with user growth and online harassment.

Google is doing so well that investors aren’t fixating on the losses with Other Bets, Kessler says. 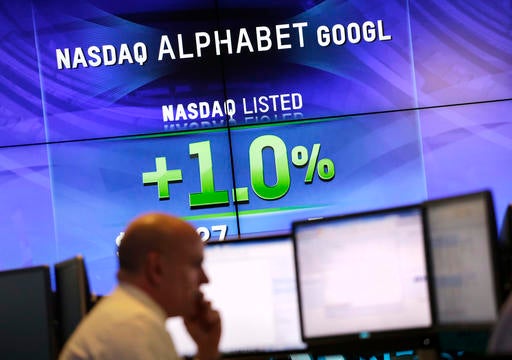 In this Monday, Feb. 1, 2016, file photo, electronic screens post the price of Alphabet stock at the Nasdaq MarketSite in New York. Google has been thriving since adopting Alphabet Inc. as its corporate parent in 2015, underscoring how much the company still depends on digital advertising despite spending heavily on quirky projects in search of another technological jackpot. The performance serves as a reminder of the challenge facing Alphabet as it tries to become something more than a one-trick pony and build an innovation factory. AP

Only three Bets — Nest, Fiber and Verily — are generating even a smidgen of revenue. In nine months, the Other Bets companies have lost a combined $2.6 billion on revenue of $410 million. Another big loss is expected in the July-September quarter; the company reports results on Oct. 27.

BGC analyst Colin Gillis still sees the gamble as prudent and expects at least one of the projects will come up with a breakthrough that lessens Alphabet’s dependence on Google.

Optimism is fine as Google keeps growing at a robust rate. But Wall Street will likely ratchet up the pressure if the company falters and nothing emerges from Other Bets to help pick up the slack. TVJ